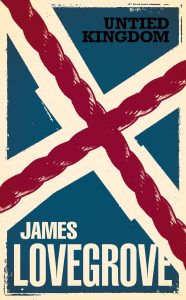 As you can imagine from the title, James Lovegrove’s Untied Kingdom (2003) is a post-collapse novel with a distinctly British flavor. I’m not sure what continues to draw me to this kind of book — I often find post-collapse stories science fictionally wanting by their very nature. And yet there’s often something quite compelling about them, and my reading history is peppered with titles: Darin Bradley’s Noise, Will McIntosh’s Soft Apocalypse, Marge Piercy’s He, She and It, and John Varley’s Slow Apocalypse, among others.  Untied Kingdom slots into that tradition comfortably, and it’s a thoughtful and engaging example of the subgenre.

In the near future the United Kingdom has been ostracized and bombed into submission by the international community, for crimes undisclosed, and its citizens subsist in the wreckage.  Fen Morris is an idealistic schoolteacher in Downbourne on the southern coast, and things aren’t so terrible in the small town, which is run by a cheerful chap who dresses himself up as the Green Man. Then a band of London thugs shows up, busts up the village, and makes off with a van-ful of women, including Fen’s depressed wife Moira. Even though the marriage is a trainwreck, Fen sets off for London to rescue his wife, beginning a perilous quest across the drastically altered landscape of England.

Untied Kingdom is one of those books, I think, that succeeds or fails based on how you read it — and it can be read in multiple ways. As a simple adventure novel I found it moderately successful, its simple plot broken down into smoothly written, novella-sized chunks that interweave Fen’s journeys with Moira’s horrible plight as an unwilling companion to the “King” of a tough London street gang. As post-collapse SF, I found it somewhat unsatisfying, but only in the way the subgenre is inherently unsatisfying, in that it’s a throwback future that strips away the very progress that makes the future interesting to me.

Where it succeeds best, I think, is as an extended political metaphor — and I believe this is the primary intended reading. Not being British I’m probably missing quite a lot, but the way the chapters are structured lead me to suspect that they represent different eras of British history. And Moira, meanwhile, is less a character than a symbol of the nation — an idea of what England used to be, which is really what Fen is pursuing.  This reading is the most thought-provoking and the most rewarding, although I’m not sure I got it entirely, being hopelessly American.  That said, for a long novel it read quickly, made me interested in the outcome, kept me entertained, and made me think. For me, a qualified but comfortable thumbs-up.

Novel: After the Golden Age by Carrie Vaughn