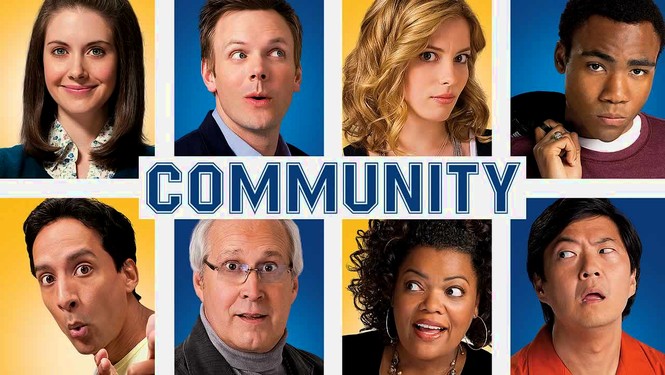 After years of peripherally sensing the devoted passion of its cult following, and later its appalled disappointment, I’ve finally caught up with Community. Now I get it. This show starts modestly, rises to inspired heights for a while, and  then suddenly experiences the quickest, most precipitous drop in quality I’ve ever seen in television. Marathoning this series was a real roller coaster.

Joel McHale stars as Jeff Winger, a fast-talking lawyer whose career implodes when it comes out that he faked his bachelor’s degree. To rebuild his lifestyle he enrolls in Greendale Community College, the iffiest of learning institutions, to whip through an actual degree and get back to work. Shallow, vain, and self-centered, Jeff has no ambition but to fake his way through classes — until he meets attractive classmate Britta Perry (Gillian Jacobs). To score with Britta, he fabricates the existence of a study group and invites her to join it. Word gets out, though, and Jeff’s gambit lures a collection of misfits; suddenly his fake study group is a real one.

The series starts pretty conventionally, and I found the first few episodes tough-going. In the early days Jeff is almost fatally unlikeable, and the rest of the gang’s admiration for him as the “cool” member of the group rings false. Gradually, though, the ensemble chemistry starts to take over. It starts with Danny Pudi and Donald Glover, whose childlike, best-friend escapades provide some of the funniest early scenes. The show recognizes the importance of their friendship early and smartly plays it up. The rest of the characters, more thinly conceived, take a little longer to find themselves, but eventually they do. And once Abed’s pop culture addiction starts to warp Greendale’s reality, comedy magic starts to happen.

By the end of season one, when the writers have a firmer grip on the characters and how to leverage them, things really start to click. This is also when the show starts to deliver its outstanding, high-concept setpiece episodes. The two episodes that cemented my love for the show were “Contemporary American Poultry,” in which the group takes over the school cafeteria in the style of a Martin Scorsese film, and “Modern Warfare,” the infamous paintball episode. These episodes secure the show’s grasp of brilliant metahumor, which would become a series trademark.

Community sustains an impressive track record throughout seasons two and three. While Glover and Pudi are the runaway stars of the series, everyone brings something to the table. As the study group rehabilitates Jeff, McHale becomes more likeable — and funnier, especially when the sensitivity underneath his enormous ego starts to emerge. Alison Brie starts to bring scene-stealing geeky charm. Also becoming increasingly important is Jim Rash, whose flamboyant performance as the college’s dean gets more and more hilarious as the show progresses.

Meanwhile, the run of brilliant one-off concept shows keeps coming.  Special mention needs to be made of “Conspiracy Theories and Interior Design,” in which the show sends up the conspiracy thriller against a delightfully silly backdrop of a campus-wide pillow fort. But in the search for a personal favorite Community, there are tons of worthy candidates: “Epidemiology,” “Advanced Dungeons & Dragons,” “Paradigms of Human Memory,” “Remedial Chaos Theory,” “Pillows and Blankets,” and “Virtual Systems Analysis” are all standout hours, and I could keep going.

Towards the end of season three, I have to say, the show starts to experience a little bit of concept fatigue — but things don’t really start to fall apart until season four. The much publicized dismissal of showrunner Dan Harmon is largely to blame, and whoever replaced him really steers Community over the cliff. Season four’s scripts feel as though they were written from an incomplete series bible.  Winger regresses to fatal unlikeability, while the rest of the characters devolve into one-note caricatures of themselves.  (Abed says “coolcoolcool” and tries to turn everything into a TV show.  Britta is a fuckup. Annie is a goody two shoes who says “awwww.”  Shirley is a Christian who says “awwww.” Repeat ad nauseum.) All the depth and shading built up over three seasons evaporates. The new writers are also ham-fisted in their deployment of metahumor. Where earlier seasons would cleverly, slyly infer, season four rams it down your throat. The dialogue is too on-the-nose, and the pace is just off. It’s a remarkably stark decline.

I daresay you could skip season four and not miss much.  And yet…there were glimmers of the old magic late in the season.  The Jim Rash-penned “Basic Human Anatomy” (which plays the Freaky Friday card on Abed and Troy) is worth a look, and there are a few other flourishes.

In the end, I’m glad I soldiered through to the end of the season. Because weirdly, Community was renewed in spite of poor numbers and quality, and even more weirdly, Dan Harmon has been reinstated as showrunner. (Has that ever happened in TV history? Fired showrunner rehired?) On the other hand, Chevy Chase is gone (probably not a big deal) and Donald Glover is leaving (a HUGE deal). So I have to admit, I’m really curious to see whether the show can recover in season five — and if so, how.  Is there anything left in the tank, or is something fundamentally, irrevocably broken?

Either way, despite the unevenness, consider me onboard as a genuine Community fan.  There’s just too much awesome is the first three seasons to write off the “darkest timeline” that is season four. The next season should be interesting… 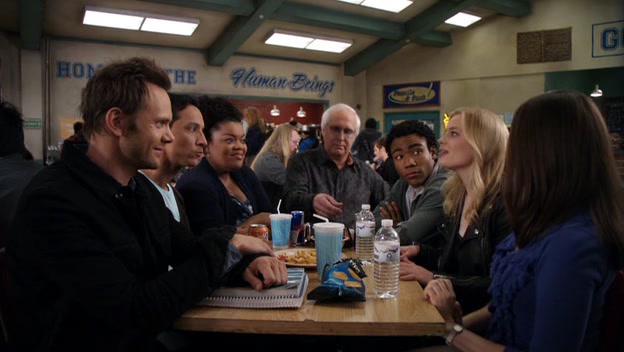 Film: In a World…