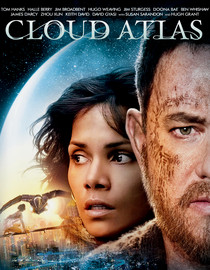 So, Cloud Atlas (2012). Wow, what a spectacular mess! This three-hour epic, adapted from David Mitchell’s novel, is the kludgiest of all kludges: a fast, dizzying sprawl that jukes and dekes all over the screen, like several different movies spliced together by editors with guns to their heads. It’s ambitious as hell, but just as pretentious; when it works, it’s flashy and compelling and even eloquent, but just as often it raises eyebrows, drops jaws, fumbles its tones and overstates its themes. It’s by no means a great film, but it’s clearly an attempt at greatness, with superior moments. It’s a fascinating beast.

The narrative spans centuries, and follows six different tracks that, as the film unfolds, turn out to be cleverly, loosely connected to each other.  In 1849, lawyer Adam Ewing (Jim Sturgess) travels to a remote Pacific island, where he becomes entwined in the lives of a slave (David Gyasi) and an unscrupulous doctor (Tom Hanks). In 1930s England, young musician Robert Frobisher (Ben Whishaw) takes a job working for an established composer, Vivyan Ayrs (Jim Broadbent), where he finds the inspiration for his own work. In the early seventies, a chance encounter introduces reporter Luisa Rey (Halle Berry) to a Dr. Rufus Sixsmith (James D’Arcy), which puts her onto an energy-industry conspiracy. In 2012, publisher Timothy Cavendish (Broadbent again) gets into hot water when one of his clients’ books takes off — and his gang friends decide they deserve a cut of the profits. Meanwhile in futuristic Neo Seoul, Korea, Sonmi-451 (Doona Bae) is part of an artificially-created underclass of “fabricants,” freed from subservience by revolutionary Hae-Joo Chang (Sturgess again) as part of a plan to undermine the prevailing, unjust order.  And in the far future, Zachry (Hanks again) lives among a primitive tribe in “the Valley,” his life disrupted by the arrival of Meronym (Berry again), who hails from the Earth’s last advanced society and has come to his territory on an important mission.

These six stories launch virtually simultaneously, and the narrative ricochets haphazardly from timeline to timeline in a confusing, compelling tangle. Or rather, it seems haphazard: eventually, occasionally, clever little nexus points draw connections between the disparate threads. The connective tissue isn’t particularly strong on the plot level, but the themes — class injustice, dominance and subservience, the need for revolution to overturn existing power structures — remain consistent. And in the end, the plot devices that thread the timelines together attempt to sell the story’s broader mission: that this is the ultimate human story, and that human story-telling (in journals, music, letters, films) all contribute to the lore of our existence.

To further illustrate the universality of its human drama, every actor recurs in multiple timelines playing different roles.  Here, then, is one of the film’s most problematic aspects. Due to the globe-spanning nature of the story, Cloud Atlas necessarily includes characters of many races — and the film deploys its cast across the entire spectrum, casting against race (and occasionally against gender). It’s a thematic strategy, clearly, but it’s an awkward and regressive one that doesn’t pay off. Aside from the weird racial insensitivity, it’s also simply distracting:  the cross-dressing, cross-racial makeovers are, by and large, unconvincing and draw undue attention to the film’s craft, rather than feeling seamlessly integrated into it.  At best, it’s clever; at worst, it gives the film a jarring Monty Python feel. The decision is bold but ill-considered, more disruptive than effective.

And then there’s tone, which is all over the map.  Two teams directed the film: Lana and Andy Wachowski (of The Matrix fame) and Tom Tykwer (whose best work includes Run Lola Run and Winter Sleepers). Their directorial sensibilities mostly cooperate, but at times the Wachowskis’ eyebally-kicky SF action proclivities overwhelm the film (particularly in the Neo Seoul scenes), while one of Tykwer’s sequences, the 2012 storyline following Broadbent’s bumbling publisher, is a weak link that clashes tonally with the rest of the film’s super-seriousness.

For all that, I really enjoyed watching this complicated mess. It’s a little like listening to postmodern mash-up music that deliberately provokes and surprises — whenever it looks like it’s going to sustain an idea, it left-turns violently, keeping the consumer unbalanced.  This isn’t just six movies at once, it’s six movies of different genres: historical epic, historical romance, hardboiled period mystery, madcap contemporary humor, futuristic SF, and post-apocalyptic fiction, all boiled together in an unlikely stew. It’s trying things out, rather brashly. And while it doesn’t always work, it’s fascinating in the attempt, a glorious, eye-popping failure. Recommended…sort of?