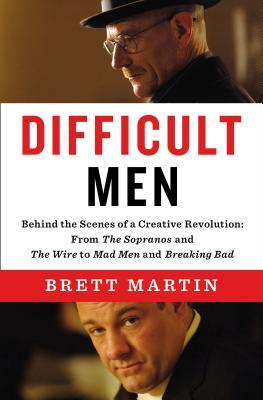 A friend of mine at work loaned me Brett Martin’s Difficult Men (2013), an insightful look at the transformation of television story-telling during the past fifteen years.  Anyone interested in the creative evolution of the medium will find it a revealing  glimpse behind the scenes into the writers’ rooms of some of the new century’s best new series. (Although, it should be noted, familiarity with the shows under discussion is highly recommended.)

Martin describes the period between 1998 and 2013 as the “Third Golden Age” of television, and cites as its starting point the debut of HBO’s The Sopranos.  After briefly detailing the television wasteland from which it emerged, he entertainingly tells the story of how a chaotic combination of factors – in Hollywood, in technology, and in the wider world – led to the creative risk-taking and artistic ambition of the Third Golden Age.  The changing economics of cable television, the rise of the TV-to-DVD phenomenon, the challenges of other entertainment options like video games and the Internet, and the political upheavals of 9/11 are just a few of the factors that give weight to his argument.  But Martin also posits, fairly convincingly, that there is a thematic connection between many of the Third Age’s new shows: they often focus on entitled and powerful men, and the struggles of those men to balance their most selfish impulses against a greater good for their relationships, their families, their jobs, and society. Uncoincidentally, most of the shows examined were created and run by white, male writer-showrunners who in many ways resembled the types of characters they were writing about. Are these the thoughtful ruminations of intelligent auteurs coping with the decline of traditional male power in a post-feminist world, even as they ruthlessly wield that power? Or are they petulant, stubborn celebrations of the very male behavior their characters are being challenged to reform? Martin’s book suggests it may be both.

The book shines its lens first on the explosive rise to prominence of HBO, examining four shows in particular:  The Sopranos, Six Feet Under, The Wire, and Deadwood, early masterpieces that set the standard for TV quality in the early 2000s. The focus then shifts to the cable productions that followed in HBO’s wake, examining three series in particular:  The Shield, Mad Men, and Breaking Bad.  The chapters about these various shows are thoughtful examinations of each series, their antihero protagonists, and most revealingly the powerful, “difficult” men who created and ran the series. He devotes considerable time as follows:

(I have to say I find Six Feet Under an odd fit with the rest, both in terms of Nate Fischer’s character and Alan Ball’s personality, but I think Martin includes the show because it was so important to HBO’s reputation for quality.)

It’s a useful guidepost for an examination of the era, although it has its limitations, as Martin seems aware – in the interest of making the subject manageable, he disregards many important shows that fall outside of the cable TV, one-hour drama, male-showrunner parameters. I have a hard time imagining a discussion of the excellence of 21st century TV that largely fails to mention comedy (i.e., Arrested Development) or network dramas (Friday Night Lights, The Good Wife, and more) as part of the essential landscape. But the thesis has its uses, and it’s difficult to deny the sheer dominance of the male antihero during the Third Golden Age. (Martin does acknowledge, and bemoan, the woeful lack of both female showrunners and female heroes and antiheroes — giving mention to how female antihero shows like Nurse Jackie and Weeds are afforded thirty minutes rather than an hour, and pointing out how extraordinarily rare Lena Dunham’s position in the industry is. One hopes he’ll some day write a book about a Fourth Golden Age wherein this gender imbalance isn’t so glaring.)

If I have another problem with his argument, it may be with the definition of the Golden Ages in general. The Second Golden Age, evidently, centers around 1980s shows Hill Street Blues and St. Elsewhere. Maybe it’s just me, but I remember the 1980s as the real wasteland; TV didn’t start to get remotely interesting until the 1990s, with Buffy the Vampire Slayer, Homicide: Life in the Street, NYPD Blue (which is at least cited as a “bridge show”), Twin Peaks and The X-Files, for example. It seems to me these shows deserve a little more credit as formative work for the shows discussed in the book – rather than merely proving grounds for some of the writers interviewed.

But for all my quibbles, I think it’s a fascinating read, especially for its enlightening interviews and its overviews of the shows’ critical and popular reception. It’s also an interesting time capsule, I think, for the entertainment industry of the 2000s. This was definitely the era when I was lured back to TV, and I think it did become the dominant  story-telling medium of the time; Martin’s narrative about how and why that happened is entertaining and thought-provoking.