Community’s improbable fifth season was perhaps my most anticipated real-time watch of the year. Now that it’s wrapped, I can say that it lived up to that billing: not because it was entirely successful – it wasn’t – but because it stopped the bleeding, and restored the show’s unique sensibility for ambitious and unpredictable comedy.

Emerging from the ashes of an awful season four – which the show, in typical fourth-wall-breaking fashion, calls “the gas leak year” – this latest session boasts the return of original showrunner Dan Harmon. It takes a few episodes to shake the rust off, but it quickly becomes clear just how much Harmon’s touch was missed. His first task: to somehow keep all the characters at Greendale for another year. In “Repilot” he accomplishes this by bringing back pivotal figure Jeff Winger (Joel McHale) as a law teacher when his new practice fails. The rest of the gang simply re-enrolls, joining the “Save Greendale” committee: a student-teacher organization formed to keep the struggling campus alive (and, you know, justify the group gathering in the study room every week.)

While Harmon’s singular grasp of Community’s style definitely rights a listing ship in the early stages, the show has other challenges to overcome: specifically, the departure of Donald Glover as loveable dimwit Troy Barnes. His write-off storyline leads to two early memorable episodes: “Cooperative Polygraphy,” in which the group submits to a collective lie-detector test, and “Geothermal Escapism,” the season’s most notable setpiece episode which transforms the campus into a Mad Max-like rendition of the childish “lava game.” The latter is a near-classic.

But it’s also Glover’s sendoff, and once he’s gone, the team chemistry feels a little weird – indeed, even Chevy Chase’s cranky Pierce Hawthorne is missed. Smartly, the writers mine this for story material, particularly with Abed (Danny Pudi), whose co-dependent friendship with Troy was such a huge part of the series’ ascendance. But Abed feels a little lost without Troy, despite Pudi’s game performances (including an inspired Nicholas Cage outburst early on).

The show knows it can’t replace Glover, but it makes a stab at replacing Chase with crusty old criminology professor Hickey (Jonathan Banks).  Banks is fine, but Hickey probably gets too much screentime, as does Ian Duncan (John Oliver) – the characters tapped as faculty members for the committee. The smaller cast probably should have been an opportunity to showcase the underutilized Britta (Gillian Jacobs) and Shirley (Yvette Nicole Brown), but for some reason Hickey gets more play, along with traditional heavy-lifters Jeff, Abed, and Annie (Alison Brie).

Chemistry issues aside, the post-Troy episodes are often interesting in their mining of obscure pop culture. And at least two episodes hold up with the show’s best early material, I think:  “App Development and Condiments,” in which a social media phenomenon transforms the campus into a 1970s filmic dystopia, and the brilliant “G.I. Jeff,” a mostly animated episode that explores the depths of Jeff Winger’s childhood psyche. Episodes like this make it worth sitting through a few iffy failures.

The closing two-parter struck me as an uncertain quasi-finale for the series, and as such, it felt a little unsatisfying. If this is the last season of Community, I’m a little disappointed it wasn’t able to climb consistently back to its previous heights. Then again, a handful of its outings really shined, and it did sufficiently wash the taste of season four out of my mouth. For that alone, it deserves a thumbs-up. And if it does come back, I’ll definitely be on board. 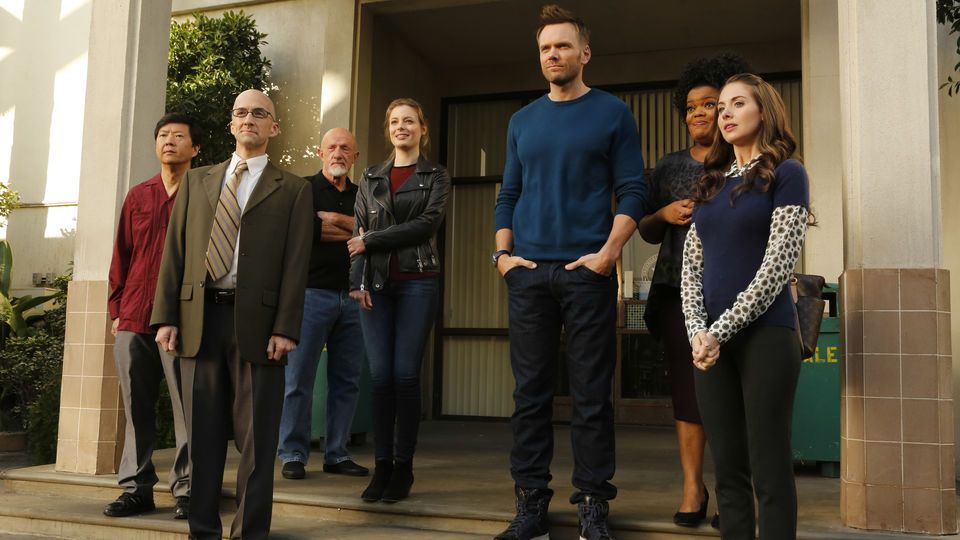