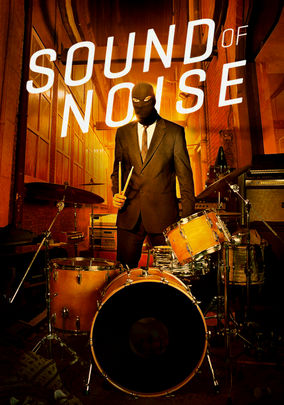 Occasionally a movie will come along simply made for you. That’s Sound of Noise (2010), an absurdist Swedish comedy about those terrorists of the music world, percussionists. Imagine if Monty Python were musicians, and got ahold of the idea for Stomp! Need I say more?

Well, I will anyway. Amadeus Warnebring (Bengt Nilsson) is the product of a musical family, with two accomplished classical musicians for parents, and a brother, Oscar (Sven Ahlström), who is a famous up-and-coming symphony conductor. But Amadeus is tone deaf, and completely incapable of appreciating his family’s lifeblood. Instead, he becomes a cop – and his peculiar condition makes him the perfect man for the job when an ensemble of guerilla percussionists, led by Sanna (Sanna Persson) and Magnus (Magnus Börjeson), start terrorizing the city with their avant-garde performance art series, “Music for One City and Six Drummers.”

I found this film pretty delightful, highlighted by its clever musical numbers, and solidly executing its hilarious central conceit: that drummers are anarchic terrorists who simply must be stopped. Much of the scripted humor is music-centric, so I think the dialogue will work better for people familiar with both the classical music world and the idiosyncracies of drummers. For those who aren’t, though, there are the inherently funny musical numbers, which structure the film neatly into “movements.”

Aside from a handful of laggy moments in the narrative, I couldn’t find much to complain about in this amusing Scandinavian contraption. If you want a particularly effective “proof of concept,” check out the short film below: