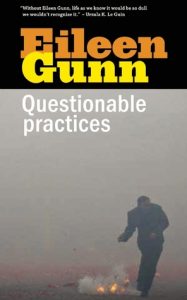 My first experience with Eileen Gunn’s work is Questionable Practices (2014), an attractive collection from the always reliable Small Beer Press. I found it a mixed bag, full of invention and humor, but perhaps with more recursive SF than I would like, as well as some fairly slight pieces.

The collection opens and closes strongly with two of the best solo pieces. “Up the Fire Road” sets a bracing comic tone for the collection in its reality-bending depiction of a camping trip gone wild, when a hippy-dippy couple falls in with a sasquatch; zany and amusing stuff.  The closer, “Phantom Pain,” is much more sober and powerful metaphorical piece about a GI’s fight for survival in World War II, and the life-changing repercussions of his experience. I also enjoyed the energetic comedy time travel of “Thought Experiment,” and the sharp little Nature vignette “Speak, Geek,” about genetic engineering and modified animals.

There are four collaborations in the collection, one with Rudy Rucker and three with Michael Swanwick. The Gunn-Rucker opus “Hive Mind Man” is a riot, genuinely funny gonzo near-futurism that takes social media networking to a whole new level. I found the collaborations with Swanwick more uneven: I ricocheted off “The Armies of Elfland,” while “Shed That Guilt! Double That Productivity Overnight!” had a few too many insider’s nods and winks. (Admittedly I have a low tolerance for this kind of recursive, meta-SF.)  On the other hand, the Gunn-Swanwick novella “Zeppelin City” is a wildly creative and highly entertaining piece of historical, steampunky fun set in mid-20th century New York City.

Overall I found this an uneven collection, then, with slight pieces mixed in among the stronger ones. But there are some great comic highlights, and there’s also a commendable restlessness to its ideas,  stylistic approaches, and imaginative flourishes.