Novel: Look at Me by Jennifer Egan 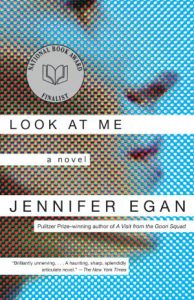 As a long-time reader of science fiction, I frequently defend the genre as literature’s most inclusive: the one that can absorb and contain the elements of other genres, but go even further thanks to SF’s speculative, visionary potential. Generally speaking I still think that’s true, but I also have to acknowledge that I haven’t read enough mainstream fiction to know exactly how true. Jennifer Egan’s fiction puts my theory to the test. While most definitely a mainstream novel, Look at Me (2002) plays the inclusivity game in reverse, incorporating the protocols of other genres into its penetrating, beautifully written examination of America’s obsession with image. It blends elements of mystery, thriller, and PI fiction into its milieu, and even – in an abstract, thematic way – the protocols of spy fiction and SF. It’s the total package, and uncommonly satisfying on many levels.

Charlotte Swenson is a fading supermodel when her career is derailed by a spectacular car accident. She survives, but the resulting plastic surgery makes her subtly, strangely unrecognizable, essentially throwing her very identity and image into question. She recovers, slowly, in her hometown of Rockford, Illinois, exactly the kind of Everywhere USA she became a model to escape, but the intervening years show it in a new light – and, when she eventually returns to New York to resume what remains of her career, her mysterious new anonymity has a similarly transforming effect on her professional environment.

Charlotte is the central figure, but the novel spins off from and informs her story with a number of other characters: the daughter of her best friend from high school, also named Charlotte, and her troubled university professor uncle Moose; a scruffy New York PI named Anthony Halliday; and an undercover terrorist from the Middle East, who is experiencing America for the first time.  Egan intertwines these fascinating lives, and it’s a bracing narrative – fragmented but intrinsically connected, a  technique not unlike her brilliant later novel A Visit from the Goon Squad, another incisive and thought-provoking critique of America. If there the metaphor was rock ‘n’ roll, here it’s image:  perceptions versus realities, the nature of identity, surfaces and subtexts, cultural and societal expectations, peer pressure, the American dream…these themes are all richly, engagingly explored. The characters of Look at Me struggle with these issues, each of their experiences colored by the unforgiving filter of the American backdrop; comparing what they want against what’s expected of them, reconciling their inner selves with how they present externally, trying to see the real world through the cloudy lens of individual perception.

Thematically it’s a fascinating hall of mirrors, eloquent and literary, but not shying away from the tools of genre to enhance the message. Egan’s reflections on the nature of identity are positively science fictional, and there’s also a prescient futurism to her contemporary world-building (the rise of social media, reality television, and the specter of escalating anti-American terrorism – it’s all quite ahead of its time, considering when it was written). Meanwhile, detective and spy fiction tropes creep into the mix: what it’s like to live one’s cover, to look one way and feel another, to keep secrets, to deceive loved ones and enemies alike, and to relentlessly pursue hidden truths. All of these elements contribute to the thematic structure – and also make this a particularly accessible mainstream novel for readers steeped in genre convention. It’s smart, powerful, and totally absorbing, and left me hungry for more of the author’s work.

A Visit from the Goon SquadJennifer EganLook at Me
Previous Post

Film: Carve Her Name with Pride