Theater: The Mystery of Edwin Drood 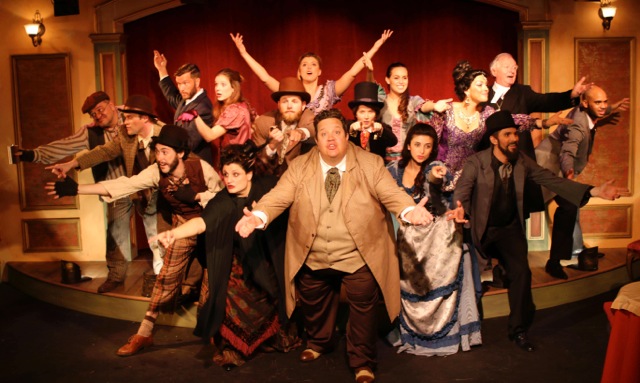 Last night, a rare outing to the theater: we saw The Mystery of Edwin Drood in Hollywood, at the Crossley Theater. While I can’t claim to be a particularly astute critic of theater in general, or musicals in particular, I enjoyed the hell out of this performance. It’s based on an unfinished novel by Charles Dickens, but this is Dickens spun for laughs: a comedic whodunit that’s also a play-within-a-play, wherein all the members of the cast aren’t just playing their roles, but they’re playing the actors who are playing those roles. It’s all very meta and infectiously silly, full of clever lyrics, quick humor, and spirited musical numbers.

The Crossley is a small theater-in-the-round, and we were in the front row, which meant the cast was right on top of us, frequently dancing, strutting, and singing just inches away. (And when I say “on top of us,” I mean it literally — I had an actress in my lap at the act break!) The close proximity, combined with the cast’s in-character mingling with the audience before and during the show, made the performance incredibly intimate and engaging; it was neat hearing the individual singing voices and seeing costumes up close and personal. The script is so full of meta moments that it was difficult to tell the “scripted improv” from the actual improv, but there was a fair amount of both as the actors surprised each other, interacted with the crowd, and occasionally cracked each other up. Particularly responsible for this Whose Line? atmosphere was Peter Allen Vogt, who played the Chairman and narrated the mystery with energy and spontaneity. The cast was full of absurdly talented singers and comedians, and I feel a little guilty leaving anybody else out, but for me it was Gina D’Acciaro who really stood out as the scene-stealing Princess Puffer.

At the conclusion, the actors poll the audience to decide the ending of this unfinished mystery, which the actors then perform based on a number of possible scenarios. Audience participation of this kind normally makes me cringe, but for some reason I got really into it this time, even singing the choruses when prompted. Really, really fun show at a very nice little theater. Los Angeles folks, it’s still playing for a few more weeks!