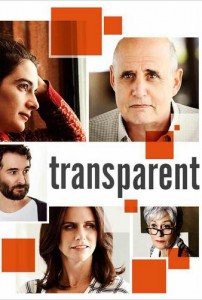 Normally when describing a new show, I’ll just compare it to similar shows. Jill Soloway’s Transparent defies that easy strategy; it’s simply too different. With the deft hand of a committed auteur behind it, Transparent is a very impressive season of television – a triumph, really. (And more evidence, perhaps, that groundbreaking TV is starting to migrate away from the cable giants to instant streaming.)

It’s a comedy-drama set in the weathy hills of Pacific Palisades, and follows the lives of the Pfefferman family – a combative, disfunctional clan with a history of awkward, fraught interactions. The focus is on three children: Sarah (Amy Landecker), the “normal one,” married with children and well off; Josh (Jay Duplass), a highly successful music producer with promiscuity issues; and Ali (Gaby Hoffman), the girl most likely to succeed…who didn’t. Together they’re all crass smiles and competitive banter, but underneath they’ve all got issues: secrets and problems they can’t acknowledge to each other, let alone themselves. Their lives are thrown into further turmoil when their professorial father Mort (Jeffrey Tambor) gradually comes out as Maura.

With its quirky, indie ambience, its relaxed, semi-improvisational style, and its unusual focus on a major transgender character, Transparent is a bold, unflinching, funny, and moving series. Without being preachy, it handles touchy issues with both sensitivity and realism: reveling in the awkwardness of the family’s experience, but also making it sympathetic and relatable. The Pfeffermans aren’t exactly likeable – indeed, they’re generally quite unlikeable. But their knee-jerk sniping and intolerance is part of the point. Compared to her children, Maura, while hardly perfect, is the show’s most sensible and sympathetic figure. Her children’s issues are more hidden than hers, but they’re also bottled up, toxic and troubling. The show fights against stigmas to show the universal, underlying humanity in us all, and the message – even couched as it in such awkward, sometimes ugly interaction – is ultimately uplifting.

As Ali, Hoffman owns the series, an unconventional lead who throws herself fearlessly into raw emotional situations. And Tambor has never been better as Maura. But the entire cast is terrific, and it’s filled with great support very much in keeping with the quirky, indie production vibe. Judith Light, Kathryn Hahn, Rob Huebel, Melora Hardin, Bradley Whitford, Carrie Brownstein, and Michaela Watkins all stand out in nuanced and entertaining supporting roles.

Transparent is a one-of-a-kind series that goes where other shows won’t go, to say things that need to be said. Fantastic.