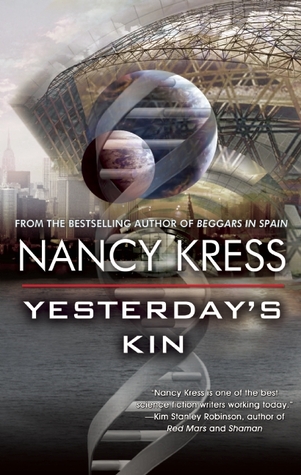 Nancy Kress is a consistent source of satisfying core science fiction, and her recent novella Yesterday’s Kin (2014) is another success. Its sfnal furniture is familiar, but as usual Kress leverages it skillfully into something both entertaining and relevant.

Marianne Jenner is a scientist whose discovery of a new haplogroup of mitochondrial DNA propels her unexpectedly onto the world stage. It turns out that aliens from another system, who arrived months ago and have lingered mysteriously on their ship in New York’s harbor ever since, want her to join a scientific team that’s working to avert imminent global catastrophe. Even as she throws herself into the job, she can’t help questioning their motives – which also happen to entangle her ne’er-do-well son, Noah.

It’s a story laced with recognizable SF trappings: alien first contact, scientists under pressure, a ticking clock counting down worldwide apocalypse. As usual Kress grounds the narrative in the details of the science, but doesn’t lose sight of the people embroiled in its skiffy disaster scenario. Marianne and Noah, whose addiction to an identity-warping drug is a story in itself, make for accessible alternating viewpoints on the story’s escalating crisis. Kress keeps the reader guessing right up until the end, all the while delivering compelling prose and thought-provoking commentary. Great stuff.

Novella: We Are All Completely Fine by Daryl Gregory

Collection: Emerald City and Other Stories by Jennifer Egan