Collection: Sergeant Chip and Other Novellas by Bradley Denton 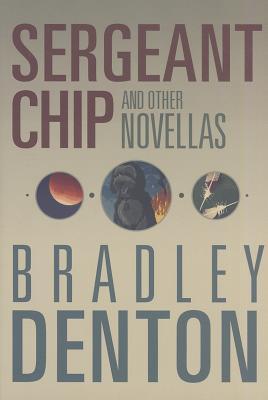 It had been far too long since I’d read some Bradley Denton, so it made sense to scoop up his collection Sergeant Chip and Other Novellas (2014) – after all, I’d read the title story twice before and it’s an all-time favorite. This beautiful book from Subterranean Press is full of smoothly written and engrossing speculative fiction.

The collection opens with “Sergeant Chip” (2004), a gripping futuristic war story with a most memorable protagonist: Chip, a dog, who serves faithfully by the side of his master, Captain Dial. Chip’s experiences, recounted in a clipped, distinct voice, tell a tragic tale of battlefield chaos and military corruption – all from the point-of-view of the most loyal, admirable soldier ever imagined. Once again, reading Chip’s story both won my heart and broke it. A wonderful novella.

Long before Dexter there was Denton’s notorious serial killer, Jimmy Blackburn, whose creepy lore grows in the supernatural horror of “Blackburn and the Blade” (2006). The protagonist’s life is detailed fully in the 1993 novel Blackburn, but this novella fills in the blanks on one of his unreported victims. Blackburn’s transient existence lands him in the Quad Cities in the mid-eighties, where his simple desires – to buy a Ford Thunderbird, protect his dog, and make his way to Chicago – become entangled with the locals, ultimately delivering him another worthy target of his murderous impulses. Full of dark shadows, explosive violence, midwestern ambience and black humor, “Blackburn and the Blade” is an entertaining ride for fans of this character and his, uh, peculiar worldview.

Finally there’s “The Adakian Eagle” (2011), a terrific blend of detective fiction, history, and paranormal fantasy. Set amidst the U.S. military presence on the Aleutian Islands in 1944, it features a fifty-year-old Dashiell Hammett – at that time, a corporal in the army with his writing days behind him. Thanks to a colonel with a chip on his shoulder, Hammett gets mixed up with the protagonist, a young private with a dark secret. Together they’re sent to investigate what appears to be a weird, ritualistic murder of an eagle, only to find themselves embroiled in a web of supernatural intrigue on the remote island. It’s a structurally satisfying love letter to Hammett and his work, flavored with Denton’s deft handling of genre tropes, all set against a unique backdrop both geographically and historically memorable. It caps off a very satisfying collection of short novels from an underappreciated voice in speculative fiction.