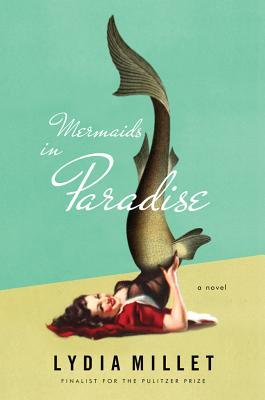 For a while now I’ve been enjoying the way Lydia Millet mixes clever satire, environmental themes, sociopolitical commentary about American behavior, and SFnal undertones, and Mermaids in Paradise (2014) capably continues all those trends. It’s another quick read full of rapid-fire wit and eloquent observation, a zany comedy that ultimate resonates with a graceful, serious message.

The narrator, Deb, is your garden variety ugly American: a vain, eye-rolling Southern California businesswoman who’s sleepwalking through a comfortable upper-middleclass life. Deb’s upcoming marriage to a friendly and enthusiastic insurance adjuster named Chip – who may indeed be the physical embodiment of her better nature – is about to change her life in unexpected ways. Their honeymoon sends them to the British Virgin Islands, where Chip’s absurd, wide-eyed openness launches the couple into the orbit of a number of fellow tourists, including a vacationing marine biologist named Nancy. This chance encounter ends up propelling them into an adventure, when Nancy miraculously discovers mermaids – and recruits Chip and Deb into the support of her discovery.

Mermaids in Paradise has all the Millet earmarks I’ve come to adore: whip-smart observational humor, scathing sociopolitical critique, heartfelt environmental message, and effortlessly read, lyrical prose. It opens rather curiously, I must say; the first section lacks narrative focus, a funny but aimless-feeling character study of the couple in their native, urban environment. And it’s a bit off-putting, in that it doesn’t paint Deb in the most flattering of lights. But once the honeymoon begins in the second section, the story starts to click, and Millet’s clearly deliberate strategy pays off. Deb and Chip, and by extension the breezy Americans they represent, are supposed to be aimless in their day-to-day lives. The miracle of the mermaid discovery, and the comically awkward power struggle that ensues in the wake of it, gives them direction, and transforms their view of themselves and the world. The story lures you in with zany antics and incisive wit, but as her protagonist transforms, the clicking banter and clever interior monologue finds a new grace and beauty.

The final moments of the book introduce a surprising element that I’m still struggling to process; is this late twist brilliant metaphor, or adding an unneeded hammer to the narrative finesse? I’m not sure, but even if it’s the latter, it’s not a deal-breaker. Mermaids in Paradise is a rousing success, a fast, funny, and intelligent satirical fantasy that disguises its punches, but doesn’t pull them.