I was going to name this blog post “The Obligatory 2014 Year-in-Review” blog post. Normally, my process would be to go back to the previous year’s wrap-up to find a starting point, and see how I did on my goals. But I guess these posts aren’t obligatory, because there isn’t a post for 2013. I guess that shows you what I thought of 2013! 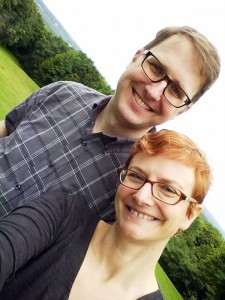 Compared to that, and really by any standard, 2014 was a pretty great year for me. First and foremost, I can’t overstate how lucky I feel to have Jenn for a partner. She makes every day better and makes me feel like anything is possible. We have a great little home and three ridiculously wonderful cats. And while the city of Los Angeles got on my nerves this year – the traffic, the heat, the neverending drought – this was definitely my favorite year socially since I moved to this neck of the desert. I made new friends, deepened existing friendships, and generally felt more connected. My local writing group is wickedly talented, incredibly supportive, and generally made of awesome. I even got out of the house occasionally: went to the theater a couple of times, enjoyed book events and writer gatherings, and saw two of my favorite bands – Secret Chiefs 3 and miRthkon – in one concert. On the health front, I even started exercising: which in my case means bouncing on a trampoline in my pajamas, and going on walks in a beautiful park Jenn discovered.

On the writing front there were several ups and downs, but definitely more ups than usual. Selling a short story to Asimov’s, and seeing my name on its cover, realized a decades-held dream, and some folks even seemed to like it. I also sold a novella, and while that sale unfortunately fell through when the project folded, I still feel like I sold a fucking novella. (Who knows, maybe it will find another home some day.) I also joined SFWA, which feels like turning a page in my writerly mindset, something I probably needed. I’m looking forward to participating in the Nebula-voting process for the first time.

But more than the external validation, this was a year of making words and enjoying the actual act of writing. While I lost faith in one finished novel, I also started two new ones. The first attempt, Ubiquity, Ltd., died after 12,000 words, but I still love the idea, which I think I just don’t quite have a handle on yet. It will be rebooted. The second one – a mosaic novel I’m calling The Osidis Accord, which combines classic spy fiction tropes and a space opera setting – is one of those daunting, massive, dream projects that I’m very nervous I’ve deluded myself about…am I cruising for another crushing disappointment? On the other hand, it’s practically writing itself, and I’m really enjoying the process of writing it. At the end of the day, the writing itself is all I can control, so I’ve decided I might as well enjoy this one. I should have a first draft early in 2015, and I do hope it’s good. Either way I think I’ve already learned that there are different ways to write a book, and I’m proud of the discipline and diligence I’ve put into it so far.

So, by the numbers, it looks pretty good as far as I’m concerned: two(ish) sales, a new story in print for the first time in six years, two new stories completed, five “episodes” of the mosaic novel in the can and a sixth in progress. It all adds up to approximately 81,200 words of new fiction this year, and that doesn’t include 143 blog posts, mostly reviews of books, movies, and TV. That’s some serious ass-in-chair writing, by my standards, and not bad for having a full-time job on top of it.

I do have some things to work on in 2015. I’d like to be better about handling work stress, and I’d like to find more satisfaction in my day job. I’d like to improve on documenting my experiences, rather than just my voracious media consumption. I’d like to stay in touch with long-distance friends more, and maybe get some more travel in. And I’d definitely like to find a productive way of coping with the ugly events of the wider world – which are legion – rather than my current approach, which is to bury my head in the sand, recoil in disgust, or sink into despair.

But by and large, 2014 was pretty awesome for me, and I’m feeling very fortunate indeed. Thanks for reading, and see you next year!

Novel: The Peripheral by William Gibson