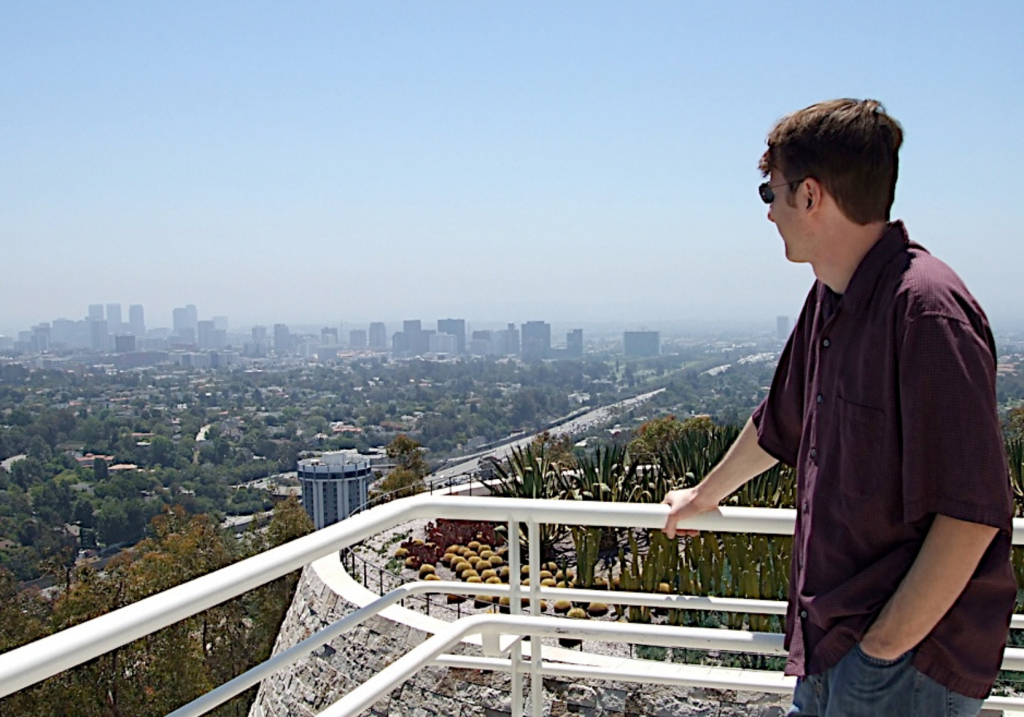 Today is my last full day as an Angeleno.

Even this close to our move to Portland, I’m still kind of in that surreal, moving-crisis headspace that fills your day with so much activity that the reality of what you’re doing never quite sinks in. It’s been full speed ahead ever since we got back from our trip to the Pacific Northwest in January – was that really just two months ago? – and now all that effort is coming together. Still, the jaw-dropping rhetorical questions! Have I really just exploded my life? Am I really about to start over somewhere else?

I moved to Los Angeles in the summer of 2007. It feels like a lifetime ago that I shut down ten years in Iowa City, selling, donating, trashing, or shipping all my worldly possessions, and flying out to a new home, a new job, a new relationship, and a new life. Jenn made the transition a smooth and easy one, and I never doubted my decision to come out here to be with her. But my relationship with the city was a different story. It was nerve-wracking at first. While Jenn was off at work I would walk the hot, desert streets of Tarzana trying to get the feel of the place, overwhelmed by the press of people, the aggressive traffic, and all the fascinating different. Eventually, I bought a car and I’ll never forget the panicky, sweaty drive back from Orange County, gingerly negotiating the choked LA freeways feeling like a slow-motion accident in progress. One day, during a desperate stretch of a difficult job hunt, I went out of the house for a while and wound up verging on panic in the magazine aisle of a bookstore. What am I doing here? Do I belong here? Does anyone belong in Los Angeles?

But gradually I got into the place. I remember the enthusiasm of going to Lulu’s Beehive in Studio City once or twice a week (thanks, Lisa!), feeding off the aspirational Hollywood energy as I wrote TV scripts and let the dreamy, anything-can-happen irreality of Southern California wash over me. Then I landed a job, became a commuter, and learned how to drive here, which pried me forcibly out of my small-town shell. In the early days at work, my desk faced windows overlooking Brentwood and the Santa Monica Mountains…I could see the Getty Center perched nearby, and the ocean way off in the distance. It was a far cry from the open-plan, industrial office of my old digs in Iowa, where the windows overlooked rolling fields and hills and the extremes of the midwestern climate. No more frozen landscapes, no more thunderstorms or tornado skies. Just buildings, mountains, and sun, sun, sun.

Los Angeles is a car city, and driving was the way I gradually came to terms with the place. What an absurd, amazing, energizing, suffocating sprawl of pavements. One of my favorite things to do was load up on errands and spend my Saturday ricocheting all over the San Fernando Valley, marveling at the relentless development, the diversity, the richness of experience. When my commutes got complicated by endless construction on the 405 (seriously, like six years of it), I found myself forced to explore alternate routes home every night. These were often infuriating but occasionally magical drives through LA’s crowded roster of mutated neighborhoods: Brentwood, Santa Monica, Bel Air, Culver City, through the winding passes of Sepulveda and Beverly Glen and Topanga Canyon. Each drive, no matter how frustrating, increased my awe of the city: its shimmering beauty and grungy ugliness, its vast disparities of experience, from the obscene wealth of one neighborhood to the grim, dingy bleakness of the next. It always felt a little like sifting creative energy out of thin air whenever I drove home, and the next morning I would channel that energy into writing, words fueled by LA’s particular characteristics: its fractious relationship with the environment, its grasping ambition, its enthusiastic dreaminess, its haphazard and out-of-control development, its outlandish entitlement and unquestioning, powerful confidence. I got a novel and several short stories out of this place, and a much, much different perspective on the world.

Of course, there’s a dark side to the city’s enormity, its frenetic pace, and its extremes of power, privilege, and wealth. The place wears you down with its ludicrous traffic, its increasingly long hot seasons, its drought, its me-first attitude, hellacious impatience, ubiquitous crowds and rat-race feel. As much as I drew creative energy from this place, I gave a lot back. There’s something soul-draining about LA’s relentless striving and tense urban chaos. Once it became clear that there was no reason for us, professionally, to stay here, the idea of relocating went from hypothetical goal to inevitable, essential reality. It was time for change, and we’re making that happen now.

That said, I will miss this place. Oh, the food! And the movie theaters! The views from the Getty and the Griffith Observatory, the weirdos of Venice Beach, the ocean breezes of Santa Monica, and Jim Rockford’s beach in Malibu. Hockey games at the Staples Center. The wealth of concerts and plays and cultural events to choose from. And the dizzying view of its massive, lit-up sprawl when flying in and out of Burbank or LAX. And finally, of course, there are the people I got to know here: my various local friends and work colleagues and especially my amazing writing group, the Freeway Dragons, all of whom helped make this such a rewarding and exciting place to live. I’m going to miss you all, and – if you’ll permit me plagiarizing my own Facebook status– I’m going to miss this wild, frustrating, vibrant, wonderful, randomly terraformed, haphazard desert metropolis full of dreams. Goodbye, Los Angeles!

Film: The Strange Color of Your Body’s Tears