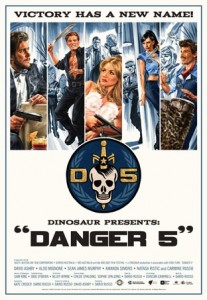 It fills me with a perverse sense of joy that something as weird, uncompromising, and wrong as Danger 5 (2011, 2014) exists. There are bad TV shows, and there are so-bad-it’s-good TV shows, but Danger 5 is a rare beast: a knowingly bad show that is so cleverly bad, it’s kind of amazing. Or, maybe, awful.

The Australian-produced Danger 5 is — or perhaps I should say, it starts as – a 1960s-style spy spoof about an international team of operatives tasked with saving the world from the Nazi menace – and, of course, killing Adolf Hitler. Further summary? Unnecessary. This show is bonkers. It’s Thunderbirds by way of Our Man Flint, produced by Sid and Marty Krofft. There are puppets, and miniatures, bizarrely reimagined Nazi villains and hilarious anachronisms. The dialogue is random, and deliberately, badly dubbed – even the English lines. The special effects are brilliantly horrible, the tone is brain-meltingly crass, and it revels in its nutty, self-aware political incorrectness. It is at once a travesty and a work of mad genius, sure to repel as many as it lures. It’s the kind of show you watch with your jaw hanging open. It makes Iron Sky look tame. Check this out (not exactly safe for work):

I’m guessing many of you didn’t make it through the trailer. And get this: it gets even weirder. In season two, the show’s satirization of the excesses of 1960s wish-fulfillment adventure morphs into a send-up of 1980s film-making excess. The war is over, but Hitler is still at large, and the Danger 5 team reunites to hunt him down and take him out. The chase leads them across a horrible cinematic landscape of the very worst 1980s film tropes.

Season two’s tone skews from Rambo to Fast Times at Ridgement High to Miami Vice to Scanners to Back to the Future. It’s a seven-episode reminder of the atrocity that was the eighties, and if you can’t get through the first season, you’ll find the second one virtually unwatchable. Personally I found it difficult to like, but also impossible to turn away from, and the way it finishes off the story is unexpectedly satisfying. I watched it in a state of bemused awe. It’s a purposeful mess, but it knows what it’s doing and realizes its apeshit vision with manic confidence.

Did I enjoy Danger 5? No, because it was horrible, and yes, because it was awesome. Someone asked me over lunch recently what my TV-show guilty pleasure was, but I think I have to change my answer. It’s definitely Danger 5.

Film: Birdman, or (The Unexpected Virtue of Ignorance)