Film: Birdman, or (The Unexpected Virtue of Ignorance) 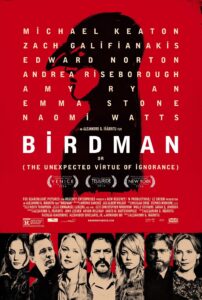 I’d like to think that if I had seen Birdman (2014) before Oscar season, I would have recognized it as the obvious Oscar-bait it is. This is a movie by Hollywood, for Hollywood, from its show-within-a-show depiction of actors under pressure behind the scenes, to its impressive (if calculated) one-take cinematography, to its scenery-chewing dramatics, to its simultaneous critique and celebration of artistic excess. I might have been annoyed by this if it hadn’t been so compellingly executed, for this is an exceptional production with a strong, intriguing narrative, superb acting, and interesting commentary about the weird chaos of modern life. I watched it fully immersed and in the moment, only growing disappointed when it continued two endings beyond all the goodwill it had generated.

Michael Keaton stars as fading movie star Riggan Thomson, who has channeled a desperate comeback attempt into a Broadway adaptation of Raymond Carver’s “What Do We Talk About When We Talk About Love.” This is a man with baggage: a recovering drug addict for a daughter (Emma Stone), unresolved feelings for an ex-wife (Amy Ryan), an ongoing relationship with a co-star (Andrea Riseborough), and, most of all, an unyielding desire to recapture the stardom he achieved decades earlier in a superhero franchise called Birdman. As the production moves into preview week, the arrival of difficult new co-star Michael Shiner (Edward Norton) puts his complicated life under even more stress – and leaves him questioning his every life choice, not to mention his own sanity.

First of all, Birdman is riveting stuff, a runaway train of escalating dramatics that shows off its talented cast – all of the above, plus Zach Galifianakis, Naomi Watts, and others – to terrific effect. It blends madness-of-the-arts themes with fantastical elements, interesting thoughts on celebrity and social media, and ambiguous realities. I found it all highly entertaining and thought-provoking, and wasn’t at all distracted by its unique cinematic style: the film splices together a series of extended takes into one long, sinuous narrative that ricochets through viewpoints without cuts, a flashier, more ambitious experiment in the mode of Hitchcock’s Rope. It’s seamlessly done, even when copious special effects come into play.

It’s all great stuff, by and large – especially the acting, for which the cast (especially Keaton) are rightly lauded. But it fails, tragically, to nail its ending…which, for me anyway, unraveled much of my appreciation of the experience. About twenty minutes before the film ends, it sticks one landing –  a false ending, basically – then continues on to a second, less-good ending, and then arrives at its actual ending, which is worse than either of the previous ones. It’s  as if the filmmakers were so absorbed in the magic of their creation – perhaps rightfully so – that they didn’t quite know when to quit. As the movie winds down, then, the spell wore off for me; I had time to consider its techniques and identify its Hollywoodisms, coming away with more negatives than I may have actually experienced. I still think it’s very much worth watching for fans of fine acting and ambitious filmmaking, but it’s a shame the destination doesn’t live up to the journey.