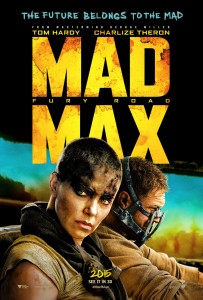 How to articulate my reaction to Mad Max: Fury Road (2015)? Well, on the one hand it’s profoundly stupid. On the other hand, it’s stupidly profound. However you slice it this is a singular creation, perhaps disposable, but also oddly essential – a movie of its time.

In a radioactive, post-collapse world a pocket of survivors lives under the vile, ruling hand of Immortan Joe (Hugh Keays-Byrne), a repressive dictator who controls a rare source of fresh water and subjugates his people with ruthless abandon. The action begins when one of his trusted drivers, Furiosa (Charlize Theron), goes rogue during a convoy run. Driving a massive war rig, Furiosa has smuggled Joe’s enslaved wives out of captivity, determined to deliver them to freedom. Entangled in the ensuing escape is Max (Tom Hardy), a “blood boy” whose destiny crosses paths with the escaping women – and gives him a chance to redeem himself for a murky failure of his past.

Make no mistake, Mad Max: Fury Road is one long car chase. Comprised of lengthy, brutal action sequences, it’s a dystopian travelogue through an interminable futuristic desert, with Furiosa and Max leading a spirited resistance to Immortan Joe’s small army of vicious pursuers. On this level it’s a chaotic mess. The violence is bloody, the pace is relentless, the physics are suspect, and eyeball kicks never cease. And unfortunately character is at a premium. Hardy makes a decent action hero; Theron one-ups him, both in terms of formidability and charisma. But their characters aren’t so much people as they are emblems. I cared about them as a team fighting insurmountable odds, but there’s no depth there.

Which is probably deliberate. Because while it may be one long car chase, it’s also one long metaphor – an untraviolent, hilariously silly, often unsubtle metaphor. Consider this: wealthy old men literally trickle down their riches to the desperate masses. They wield an army of uninformed white (really white) men to perpetuate their rule. They’ll do anything in the name of gas, bullets, or power. And they treat women as property. It is, in other words, our world, painted in crude brushstrokes on the violent canvas of the blockbuster action film – a genre it has undertaken to slyly subvert.

This is a fiercely progressive film wearing the clothes of a reactionary, conservative genre. There’s a peculiar joy in watching it dismantle the tropes of testosterone-fueled cinema. The male heroes here are the ones who finally recognize the vileness of the status quo and decide to stand up to it. Take pasty skinhead warboy Nux (Nicholas Hoult), who crumbles under the toxic masculinity of his culture, only to finally see through it and change his tune. And then there’s Max, the nominal protagonist, but more heroic in the way he supports Furiosa and her mission. The viewer’s heart is ultimately with Furiosa, and her charges, and their efforts to overturn a status quo that has long victimized and diminished them. There’s a level of crafty subtextual discourse to the film that renders its shallow characters, harebrained logistics, and simplistic plot surprisingly triumphant.

Of course, to absorb all that you have to get past the audacious idiocy of its details. I laughed for the wrong reasons as well as the right ones. But even the eyerolls come with a bonus spark of sociopolitical commentary. Or at least, that’s my take: I’m still not certain if I’m giving this one too much credit, or not enough. You know what they say: there’s a fine line between clever and stupid. Mad Max: Fury Road has plenty of both.