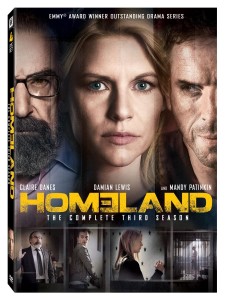 After a successful inaugural season, Showtime’s Homeland declined in its second year, and left me wondering if the series was built to last. Fortunately season three is a marked improvement, thanks to its willingness to move on from unnecessary side characters and develop in new directions. While considerably less polished than the first season, I think it’s my favorite, with more variegated episodes and a more classically satisfying focus on shifty, daring intelligence operations.

In the wake of the terrorist bombing of the CIA, number one suspect Nicholas Brody (Damian Lewis) has become an international fugitive. What the Agency doesn’t know, but highly suspects, is that he was helped out of the country by his nemesis-slash-lover, Carrie Mathison (Claire Danes), whose volatile mental state continues to jeopardize her career. Meanwhile, old hand Saul Berenson (Mandy Patinkin) is made interim director of the CIA and tasked to keep it relevant after such a devastating failure. With so many agents killed in the attack, Saul has limited resources, not to mention firebrand politician Andrew Lockhart (Tracy Letts) breathing down his neck. But he also has a plan to strike back at his country’s enemies.

But this season learns the lesson that season two taught: it deploys the cast it needs, rather than the one it has. This means jettisoning most of the Brody family, which, with the exception of the tragically underused Morena Baccarin, isn’t missed. To replace them it makes the show’s spy world more robust, bringing in new characters Dar Adal (F. Murray Abraham) and Fara Sharazi (Nazanin Boniadi) to flesh out Saul’s staff, which also sees increased duties for a convincingly jaded Peter Quinn (Rupert Friend). Saul’s long-term strategy, once it reveals itself, takes over the season, propelling an impressively elaborate operation that would make George Smiley proud. And while the specific details of that operation are surely far-fetched, they unfold elegantly, making good use of Damian Lewis (once he returns), and effectively providing closure to the always-shaky Brody-Carrie romance, which was never all that convincing. About four or five episodes into the run, I found myself hooked on the narrative in a way that the earlier seasons never managed, I suspect partly because of the increased focus on Saul and his against-all-odds scheming, and partly because the show began to deviate from its comfortable patterns and evolve in a way that felt organic.

All that said, Homeland still isn’t quite the must-watch spy series I was hoping it would be. I’m just not that onboard with Carrie Mathison as a character, and occasionally it’s just too easy to question the logic and the logistics of the show’s spycraft. But for me, this stretch is a significant step up from the previous years, at least in terms of its energy, its willingness to change, and its compulsive watchability.