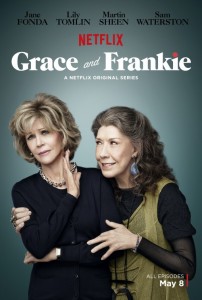 Back in the early days of HBO I watched 9 to 5 about three million times, so it was with a sense of nostalgia that I caught up with the Jane Fonda/Lily Tomlin reunion series Grace and Frankie on Netflix. It’s light and amusing stuff, both contemporary and old-fashioned, but most importantly, refreshing as a vehicle for older protagonists.

Grace (Fonda) is the uptight former figurehead of a cosmetics empire, who is going into her fourth decade of a frosty marriage with straight-laced lawyer Robert (Martin Sheen). Frankie is a hippie-dippie liberal, happily married to Robert’s energetic law partner Saul (Sam Waterston). Their lives are turned upside when Robert and Saul confess that they’ve been having a secret love affair behind their wives’ backs, and they now want to break up their marriages to be together. This thrusts Grace and Frankie together as contentious Odd Couple roommates in the families’ shared beach house, trying to make sense of their lives in their waning years.

Grace and Frankie is kind-hearted, colorful stuff that spins a warm, progressive message over fairly conventional sitcom shenanigans, making it feel both of its time and behind it. It more or less works, though, thanks to Fonda and Tomlin’s likeable (if perhaps rusty at first) chemistry and terrific support from its talented supporting cast. Waterston is particularly delightful as Frankie’s guilt-ridden ex, but the rest of the cast contributes nicely to the zippy cross-generational banter – my favorites being Ethan Embry as Frankie’s ne’er-do-well son Coyote, and the always hilarious June Diane Raphael as Grace’s spirited daughter Bianca. This isn’t earth-shatteringly brilliant television by any means, but it’s quietly diverting, open-minded, and likeable.