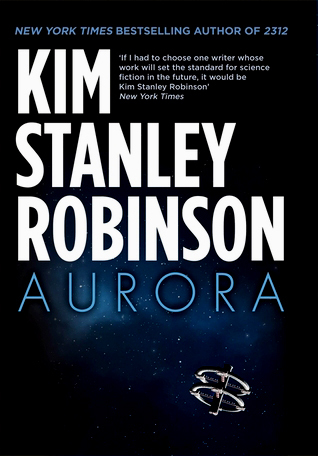 In Aurora (2015) the ever-impressive Kim Stanley Robinson tackles the generation ship story. His spin on this common trope begins in expected ways, rife with Robinson’s familiar characteristics — epic scope, detailed scientific speculation, intense environmentalism — but ultimately it takes surprising turns. The result is dark but mind-expanding, and it possesses a remarkable quality: it feels like more than a novel somehow. It’s like a metanovel, with several additional layers of reflection beyond its surface story, probing inward at the mysteries of the human condition and outward at the mind-blowing vastness of the universe. Of course, I suppose science fiction novels do this all the time, or strive for it, but I never feel it quite so strongly as I do in Robinson’s best work.

As Aurora begins, a starship makes its final approach to the Tau Ceti system, after generations adrift. Their goal is to colonize the vaguely Earth-like world of Aurora. Largely through the eyes of Freya, daughter of the chief engineer Devi, the final years of the journey show just how difficult it’s been for them, the ship’s connected biomes in a tenuous state of balance right up the moment of landfall. But the ship’s passengers have even more tough challenges ahead as they face the hardships of a precarious new environment, and unexpected conflict and political strife over what to do now that they’ve arrived at the new world.

Although it doesn’t scrimp on eye-widening sense of wonder, Aurora steps back from Robinson’s frequent utopian idealism, instead focusing on the sheer, astronomical challenges of such an ambitious undertaking, if not the near impossibility of its success. As a result it lacks the fanciful exuberance that often characterizes Robinson’s work, in favor of an even more serious, Mundane-adjacent message. The takeaway is bleaker and more grounded, then, but not at the expense of amazing, perspective-shifting depictions of the universe’s brain-exploding majesty. If this means several of the novella-sized chapters, particularly late in the book, feel like more of a slog, it’s a strategic slog, servicing the novel’s message.

Readers in search of escapist science fictional fare about a starfaring humanity will probably find Aurora wanting for comforting optimism. But that doesn’t make it any less powerful or awe-inspiring a vision, another breathtaking accomplishment from Robinson.