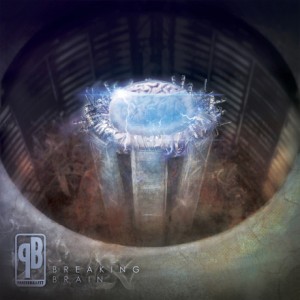 With its latest wild release Breaking Brain (2015), Panzerballett retains its dubious distinction as my favorite band. This complex German jazz-funk-metal quintet refuses to show any signs of jumping the shark after five studio albums; it continues to win my heart by laying down intense, Zappaesque melodies over swinging jazz walks, comical funk grooves, and chugging math-metal intricacy.

If their previous release, Tank Goodness, herky-jerks around with random-seeming rhythmic perversity, Breaking Brain reins in that inaccessible streak a smidge and re-finds a steadier pulse — albeit a polyrhythmic, djent-inspired one. It’s also not as cover-happy as the last several releases. On that score they go way off the map with a deeply weird, comic reinterpreation of “Mah Nà Mah Nà” (here called “Mahna Mahna”) and a scorching rendition of Trilok Gurtu’s “Shunyai.” The only over-familiar cover is a case of self-cannibalization: an even darker, grungier cover of their own cover of Henry Mancini’s “Pink Panther,” which is interesting but inessential.

There’s plenty of fresh, inventive, and technically ambitious original material on display, though, from the opening aggresion of “Euroblast” to the heavy jazz-metal of “Der Saxdiktator” and “Frantik Nervesaw Massacre.” My favorite tracks, though, are the dark metallic beats of “Smoochy Borg Funk,” in which a rare four-four time signature is complexified by orchestrated guitar-sax interplay, and the insanely dense “Typewriter II,” which is…well, see for yourself, in a music video so nonsensical it might have been made during the early days of MTV:

Overall, it’s another mindblowing collection from one of the funniest, heaviest, and most technically accomplished bands out there. The fact that a band this bizarre and unique actually exists still makes me a little giddy.