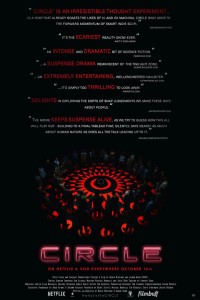 From the low-budget, bottle-show school of innovative science fiction filmmaking comes Circle (2015), a rather obvious but nonetheless thought-provoking idea piece that leverages an extended, in-your-face metaphor to supsenseful effect. Fifty people awaken standing in a circle in a dark chamber, not knowing how they got there or why. Then, a mysterious device in the center of the room proceeds to strike them down, one by one, on a set schedule. As the body count increases, the survivors quickly learn that they’re voting on who lives or dies, and can therefore control who lives the longest. Without the time to attach meaning to this cruel exercise, they quickly begin strategizing: some merely to extend their own lives, others to determine who rightfully deserves to survive.

The success of Circle hinges on a blatant central metaphor: the circle as microcosm for humanity, fractured and divisive as racial, political, and religious factors motivate the players to leverage the cruel game to either their own advantage, or a greater good. At first it seems destined to grow long in the tooth; who needs ninety minutes of social media arguing in the form of a movie? But in the end the premise is cleverly executed, as each taut round exposes new wrinkles: prejudices revealed, strategies exposed, and twists as to how the “game” works, all of which alter the playing field as the players slowly die off. A largely unknown cast — Julie Benz is the only familiar face, really — does a fine job enacting the unlikely, dialogue-driven scenario, which was evidently inspired by 12 Angry Men. I’m not sure it selected the perfect ending to accentuate its dark message, but overall it slots in nicely above films like Cube and Exam as an idea-driven, filmed stage drama about characters trapped in a baffling, science fictional pressure cooker.