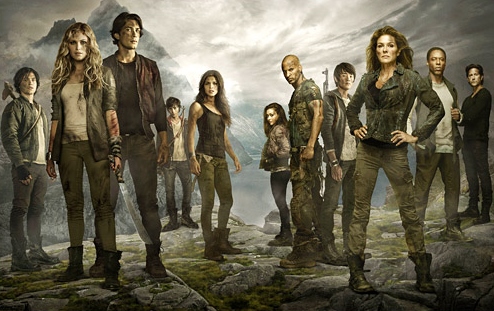 After a stirring first year, The 100 returns for a longer, more brutal, and even more compelling second season. While it might be off-putting to some, I think this is a vastly underrated show, with more complex ethical dilemmas and thought-provoking sociopolitics than most series can boast.

In season one, a hundred juvenile offenders are shipped from an orbital satellite back to an irradiated Earth to test its survivability, only to find themselves in a life-or-death struggle with the Grounders, a savage army of vicious survivors. As season two begins, roughly half of these kids are rescued by the denizens of Mount Weather, a massive, self-contained bunker where a peaceful, lavish semblance of pre-collapse civilization has been sustained. While many are happy to stay, safely sequestered from the Grounder threat, Clarke Griffin (Eliza Taylor) smells a rat. There’s something too good to be true about Mount Weather, despite the assurances of its kind-hearted president Dante Wallace (Raymond J. Barry). Meanwhile, outside, others of the group, including Bellamy (Bob Morley), Octavia (Marie Avgeropoulos), and Finn (Thomas McDonnell), find their situation complicated by the return of the Ark’s leaders to Earth. As evidence of Mount Weather’s secret treachery mounts, the survivors of the Ark realize their comrades in the bunker are in serious jeopardy, and a plan is hatched to free them that escalates into all-out war.

Its familiar SF trappings and young cast full of eye candy are probably difficult to get past for certain “serious” viewers, but that’s a shame, because The 100 is thoughtful and morally complex television. Season two is essentially a gripping, epic war story, and holy shit does it make for intense and thought-provoking drama. The conflict is violent and bloody, but also full of thorny ethical dilemmas with real and relevant contemporary parallels. The many embattled factions, however you may favor one over another, have valid and justifiable points of view, and the decision-making of the heroes and villains alike — even as they cross lines and change sides — is never arbitrary or contrived. Ultimately it’s a deftly executed SFnal metaphor for humanity’s inability to cooperate, and while the effect is powerfully tragic, there’s also an embedded message of empathy for the other that is refreshing and nuanced.

Even if you remove that subtext, you’ve still got fast-paced, twisty, gripping entertainment that’s the best of many worlds: the skiffy vibe of Battlestar Galactica, the urgent survival drama of Lost, the maneuvering power politics of Game of Thrones. But ultimately it’s more satisfying than any of those, because unlike them it has a coherent agenda to which it stays true. The narrative is assured, the messaging is consistent, the brutality follows organically from the characters and their motives (and, refreshingly, has psychological consequences), and the pacing is lightning quick. Indeed, it packs more plot into one episode than many shows manage in a season.

Finally, I have to comment on the impressive look of the show. With its cast of thousands, sweeping vistas, huge battle scenes, and convincing effects, one would think this was a high-budget, prestige cable drama. One episode in particular, “Many Happy Returns,” is just visually spectacular.

Mind you, it’s not without flaws. The more noticeable ones include iffy plot-convenient science, shaky plot-convenient Mount Weather security, and a tendency toward unbelievable human resilience in the face of physical punishment. It swings for the fences on emotionally fraught drama, and that sometimes leads to over-reaches. Regardless,The 100 remains top-notch science fiction television: mindful, heartfelt, and surprisingly ambitious, it continues to deliver on a high level.