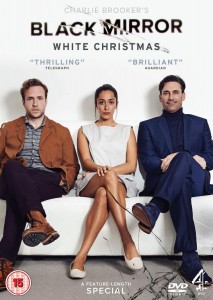 There aren’t many TV shows I’m more excited about right now than Black Mirror: it’s basically Twilight Zone for cyberpunks, and I thought its first two seasons were brilliant. Netflix now has “White Christmas” available, and while it’s listed as “Season 3,” really it’s a one-off Christmas special that fuses three cleverly connected stories of the future with the usual chilling artistry.

It’s a mini-anthology, framed by a conversation between two colleagues working together in a remote cabin. Matt (Jon Hamm) is a silver-tongued devil who’s trying to lure his taciturn partner Potter (Rafe Spall) into festive conversation after five years of being stonewalled. Potter isn’t interested, so in a show of good faith Matt starts telling him how he ended up in the cabin, in the hopes that Potter will reciprocate. Their alternating stories paint a creepy portrait of a near future darkly transformed by technology.

So far Black Mirror’s potentially difficult-to-sustain reliance on twists and surprises hasn’t steered it wrong yet. “White Christmas” is a nifty, intricately structured tale involving crass social media trends, the creepy implications of digital cloning, and an Internet of Things gone mad. Some of its plot turns are more predictable than others, but it’s a gripping and eerie vision that benefits greatly from Hamm’s effortless slickness, which keeps the narrative clicking. Spall, Oona Chaplin, Janet Montgomery, and others provide solid dramatic support, and it’s all executed with the series’ usual brazen confidence. Next time your Christmas season has a little too much holiday spirits and good cheer, “White Christmas” is the perfect antidote: a cynical, harrowing combination of near-future SF and existential horror.