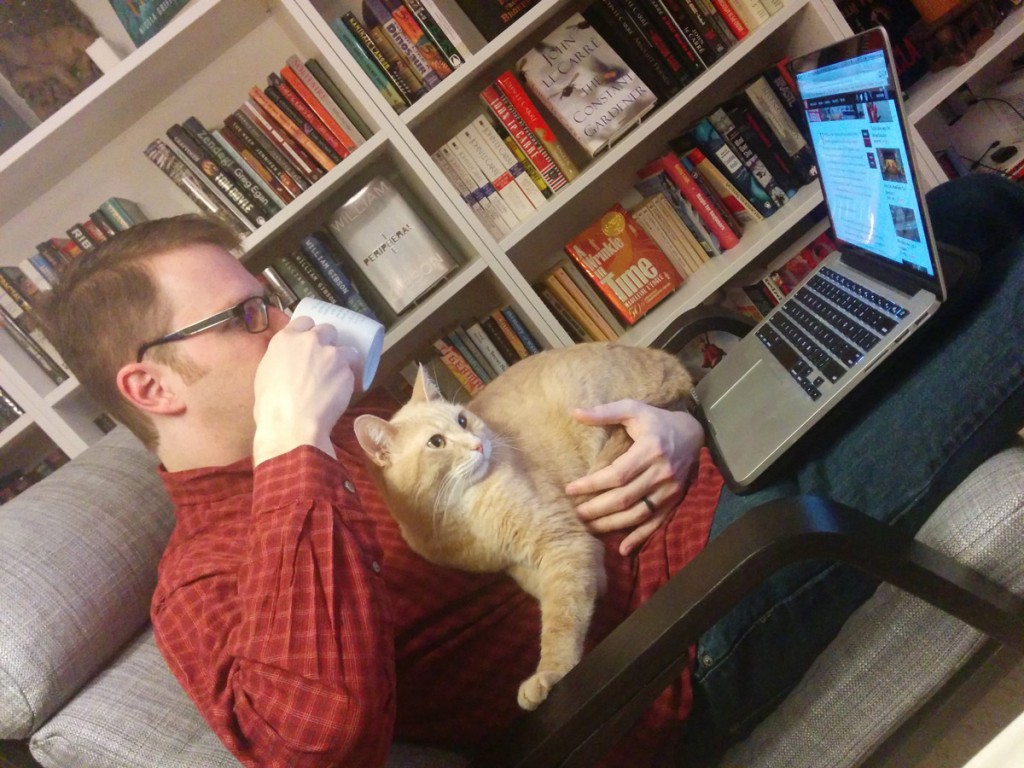 Finley is often my writing assistant

This is my 1,000th blog post. That happened faster than expected!

When I started the site back in 2009, my intention, on top of building a tiny slice of web presence for myself, was to develop steadier writing habits, and to create an online memory bank of my rampant consumption of story. I didn’t expect it to be quite as comprehensive as it did, but as it turns out, I’m kind of addicted to it now — and wish I had notes going back even further into the past.

The early heydey of blogging may be over, and in terms of visibility I may as well be screaming into a megaphone on a street corner…but blogging is still important to me, and not just because it’s the only writing I do that I know will be published. (I’m in with the editor.)

Over time I’ve learned that writing is more than just an impulse to tell entertaining stories, for me. It is, and has always been, a deeper psychological impulse to try and bridge the gap between what’s festering in my head — which sometimes feels like a vault — and the rest of the world. In other words, it’s a quest for better communication skills…one I expect will go on for the rest of my life.

Of course, my blog is rarely about opening my heart. It’s mostly reviews. And why review things? For free? What a waste of time, right?

Well, for me it’s become an essential part of my life. Because I want to call attention to things I love that others may not have heard about. Because, as a writer, I’m empathetic to that need for feedback that creative people inherently possess. Because I want to understand the modern zeitgeist and contemporary culture. And because, most importantly, art — and more specifically, story — is the only way to make sense of an increasingly strange, broken, and horrifying world. It’s how we gather up the scattered pieces of reality and give them shape.

Reviewing has taught me about writing, and myself, and the world. It’s made me more tolerant and omnivorous. When you try to communicate your internal impressions about something, you see them through a different lens.

So that’s it, I guess. If blogging is passé now, imagine how out of fashion it will be when I’m eighty — and hopefully still churning out my modest little opinions, trying to figure shit out.

Thanks for reading, and welcome to 2016!

A Whirlwind of a Year