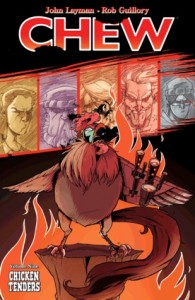 Is there a more inventive comic universe than that of John Layton and Rob Guillory’s Chew? If so, I don’t know of it. The adventures of cibopathic federal agent Tony Chu, who can read the history of whatever he eats, have spiraled in ever weirder directions for forty-plus issues now, and its most recent omnibus volumes — Chicken Tenders and Blood Puddin’ — continue that fine tradition.

Chicken Tenders is perhaps the weaker of the two volumes, but it’s still a great romp, with a heavier focus on the series’ badass battle chicken Poyo, a throwaway character who became incredibly popular. Meanwhile Tony and his rabble of daring colleagues and rivals at the FDA are tracking down the vampiric Collector, whose super power — to absorb the abilities of others — has him scouring the globe gobbling up every food-based ability he can sink his teeth into. In Blood Puddin’, Chu ramps up his pursuit of the Collector, building inexorably to an explosive confrontation. 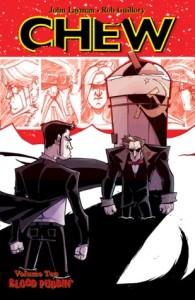 When I saw John Layton speak at Wondercon a while ago, he spoke to Chew‘s future: chiefly, that he has an end game in mind, and that issue #60 will be the last. Knowing it was all building to a planned finale only made me more excited about the title; these two recent volumes continue to propel the series headlong towards that conclusion. Colorful, zany, weird, gross, highly entertaining, and surprisingly dramatic stuff.

Novel: The Envoy by Edward Wilson