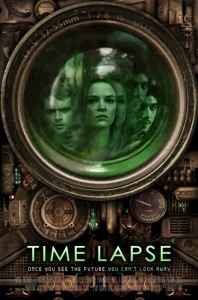 Once again my soft spot for science fiction cinema of the low-budget, thought experiment variety has paid off. Time Lapse (2014) doesn’t look like much at first blush, but it escalates impressively into a compelling Twilight Zone-y bottle show. Its creepy echoes linger long after the final credits.

It revolves around a trio of young roommates in a low-rent apartment complex. Finn (Matt O’Leary) is a starving-artist painter, who moonlights miserably as the complex’s superintendent to make ends meet. His responsible girlfriend Callie (Danielle Panabaker) is an aspiring writer. And Jasper (George Finn) is a shifty layabout with a gambling problem. They share a congenial but impoverished existence, but their fortunes change dramatically when the old man in the apartment across the courtyard disappears. When they go to his apartment to check on him, they find a huge, mysterious-looking camera pointed at their apartment across the way, and a wall covered with Polaroids of the three of them, all shot from the same angle through their living-room window. But this isn’t just creepy voyeurism: to their surprise, they learn that the camera has been taking a picture every day, exactly one day into the future…and what they see starts to inspire, and eventually control, them.

The film’s opening minutes are unimpressive: its spare interiors, tiny cast, and limited scope betray its economic limitations. A handful of awkward early line deliveries make it look like this might be a clumsy, second-rate affair. But it recovers from these missteps quickly once the simple SFnal premise is discovered, decrypted, and explored. Soon enough the material improves, the cast rallies to it, and the film becomes surprisingly gripping.

The story unfolds in nifty, stake-raising episodes, as each new grainy Polaroid poses a new mystery for them to solve. A major plot thread, naturally, involves gambling: Jasper’s greedy future self starts posting race results in the window to line his pockets. But knowing the future, it turns out, ultimately enslaves them to it…driving them, each in their own way, a little bit mad. This spirals the proceedings from a playful examination of the trope to chilling, noir twists and turns.

Unfortunately the story’s ingenious resolution kind of spits on one of the characters, but I was quick to forgive that and other blemishes in light of the film’s structural cleverness and ominous vibe. Sometimes financial constraints lead to creative solutions, and Time Lapse makes the most of its meager raw materials, spinning them into something special. A modest but spellbinding watch.