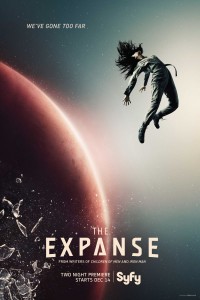 For years I’ve waited for Syfy to greenlight a series that might realize the early, if ultimately squandered, promise of Battlestar Galactica. Finally we have that series: The Expanse, which may be one of the best straight-up science fiction shows ever produced. After a slightly muddy beginning, this one quickly evolves into a thoroughly gripping season of first-class television.

Based on the novel series by James S.A. Corey, The Expanse is set two hundred years in the future, after the solar system has been colonized. A war is brewing between Earth, a planet that is dying, and Mars, a planet still struggling to be born. Both rely on the resources of the asteroid belt, where Earth maintains imperial control over the increasingly rebellious “belters.” When a ship hauling ice from Saturn back to the belt receives a distress beacon, its executive officer James Holden (Steven Strait) responds, taking a small team to investigate a crippled vessel. The mysterious signal ends up thrusting him and his crew into a possible Pearl Harbor moment that could ignite a conflict between Earth, Mars, and the Outer Planetary Alliance. Back on Earth, scheming U.N. executive Chrisjen Avasarala (Shohreh Aghdashloo) maneuvers to prevent the incident from escalating into war, while on Ceres Station in the belt, shifty police detective Josephus Miller (Thomas Jane) lands a missing persons case that may tie all the pieces of an interplanetary conspiracy together — one calculated to foment that very war. But who is behind it?

The Expanse’s involved, immersive world-building takes some getting used to, at first: the backstory is complex and the belter accent is unforgiving. But after a couple of episodes it comes into focus, and once the political lines are drawn it becomes a terrific blend of noir mystery, space opera action, and futuristic political intrigue. While Chrisjen’s narrative is more supportive than central, the slowly converging plotlines for Holden and Miller are compellingly built. I do wish I’d found these protagonists more immediately distinctive — Holden is your standard reluctant hero, while Miller is your standard shady cop — but their integral involvement in what is clearly a momentous crisis-in-the-making eventually lends depth and color to their characters. In Holden’s case, an effective ensemble chemistry distracts from the character issue: his crewmates, particularly resourceful engineer Naomi Nagata (Dominique Tipper), make a strong first impression. Meanwhile the satisfying, puzzle-solving mystery propelling Miller’s narrative rescues what is otherwise a rather unlikeable character — one that improves somewhat as his obsessive investment in the case increases.

So on a sheer storytelling level, The Expanse is a rousing success, but it’s also a show with interesting subtext. The solar system politics are thoughtfully extrapolated, and the attitudes of the various cultures provide relevant commentary on contemporary problems, particularly in regards to climate change and class. In this way the show reminds me of The 100, another series that boils down human relations to powerful microcosms. The Expanse lacks The 100′s confident, clear-headed messaging, but the nature of its factions-in-conflict drama is similarly engrossing.

Add to all this exceptional visual design, eye-popping visual effects,  and a number of first-rate suspense and action setpieces, and The Expanse is the total package: a bit humorless, perhaps, but otherwise an enthralling, bingeworthy season of television that I hope lasts a good, long time.

Film: That Man from Rio