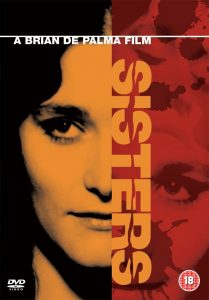 Whatever possessed the Criterion Collection to feature Brian De Palma’s Sisters (1973)? Offering the merest glimmer of De Palma’s later technical prowess, it’s a trainwreck of a camp thriller that I can only speculate Criterion thought made for an interesting historical curio.

It starts with a weird meet-cute in New York City: French-Canadian model Danielle Breton (Margot Kidder) pranks advertising man Philip Woode (Lisle Wilson) on a Candid Camera-style game show, and afterwards they go out for a drink. Their one-night stand goes awry the next morning in Danielle’s apartment, when Philip is brutally murdered by her unhinged twin sister Dominique. From the next building, the crime is witnessed by crime reporter Grace Collier (Jennifer Salt), whose previous criticism of the NYPD delays the response enough for Danielle and her creepy ex-husband Emil (William Finley) to cover up the crime. But Grace pursues the story, ultimately learning that Danielle and Dominique were conjoined twins who were surgically separated, and…well, why spoil the “surprise.”

Early in his career, De Palma developed a reputation as a technically accomplished knockoff artist. His penchant for mimicry is on full display here; Sisters is a shameless Hitchcock homage, replete with third-rate references to Psycho, Rear Window, and Suspicion, while also attempting similar story tricks (such as major point-of-view shifts). There’s even a Bernard Herrmann score struggling valiantly to class up the joint. But aside from some interesting split-screen sequences, there’s not much artistry here: the production values are grubby, the acting uneven, the plot turns telegraphed, the story elements incredibly hokey. Ultimately, the mystery is resolved in multiple infodumps: first, through convenient documentary footage, and later through the unnecessary confession of a villain. The affair ends on a comically silly rimshot.

Is Sisters a knowing satire of itself? Viewed through that lens it’s at least mildly entertaining, leaning into its campy characteristics and thriller clichés. Witness Kidder’s thick French accent, Dolph Sweet’s skeptical cop, Charles Durning’s mansplaining private detective, and Finley, whose villain resembles a cross between John Waters and Heinrich Himmler. (He might as well be twirling his moustache.) A late, trippy hypnosis sequence in a psychiatric hospital steers the proceedings into David Lynch territory, which is a welcome left turn, stirring even more what-the-fuck into the soup . But I’m not sure I’m ready to give the film credit for clever self-awareness. Even at its best it’s a clunky diversion; otherwise it’s a tacky, derivative mess.