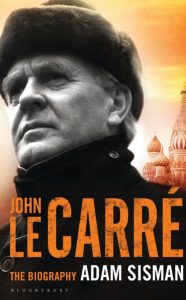 Adam Sisman’s eloquent biography of David Cornwell — aka John le Carrè — is an insightful, engaging glimpse at a remarkable life and fifty-plus year writing career. Cornwell’s story begins in 1931 in England, and Sisman spends a considerable portion of the book focused on his earliest years. The author’s formative influences were many, among them his childhood experiences of World War II, but none were greater than the influence of his father Ronnie, a notoriously likeable con man whose erratic business dealings systematically charmed and bilked marks for decades. Ronnie is so exhaustively examined that I started to get sick of him, but it’s time well spent, as Cornwell’s conflicted relationship with his father would go on to inform his work for decades, most notably in his semi-autobiographical novel A Perfect Spy. Sisman chronicles Cornwell’s schooling, his relationships, a brief military service, and short-lived careers in teaching and the intelligence services, leading up to his unlikely transition to one of the most successful writing careers in history. Particularly interesting during this stretch is the almost offhand manner in which he came to the intelligence world: casually recruited to report on fellow students while studying abroad in Switzerland, he ultimately found his way into the employ of MI-5 and then MI-6, even running agents briefly before a posting to Germany. There his embassy experience in Bonn would feed into his later novel A Small Town in Germany.

Interestingly Cornwell turned to writing fiction to relieve the boredom of intelligence work, and (ironically) to “supplement” his income. His two early mystery novels, which introduce George Smiley, built him a modest reputation before his landmark book The Spy Who Came in from the Cold catapulted him to international fame. This novel changed his life irrevocably, leading to the end of his MI-6 career and, ultimately, his unhappy first marriage. He struggled mightily with this unexpected success — his next three books did not do nearly as well — but by the late 1970s his “Quest for Karla” series re-established him as the world’s pre-eminent spy novelist.

Once the book shifts focus to le Carrè’s fiction, the biography reads very quickly. For readers familiar with the novels, it’s a little like re-reading them in succession; while not a critical examination, it does look into each book’s merits, reception, and most interestingly how they’re each a reflection of the times in which they were written. Le Carrè’s novels consistently engage with the present, so reading about them is a like a journey through history; it’s fascinating to watch how the events of the day informed the material, and how changing geopolitical circumstances spun the tone of his work.

No writer has entertained, inspired, or enlightened me more than John le Carrè. Sisman’s biography, while attempting to at times, fails to dispel the author’s mystique. Indeed, it made me want to re-read each and every novel again, from the beginning.