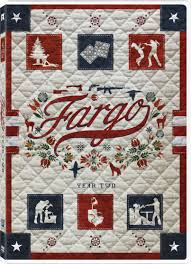 Season one of Fargo was damn near a comic noir masterpiece, but it turns out this show has another gear, and season two shifts right the hell into it. Journeying back to the late 1970s, it delves into the past of the Solverson family to further flesh out the complex criminal landscape of the series’ bizarre world. The results are explosive, and evolve the show into a decades-spanning chronicle of legendary “false crime,” a sideways secret history of the upper midwest.

In season one, retired policeman Lou Solverson (Keith Carradine) makes several dark references to a traumatic, violent series of long-ago events in Sioux Falls. Season two dramatizes these events, which turn out to be even bloodier and stranger than he ever intimated. The primary conflict involves the Gerhardt family, a minor organized crime operation controlling distribution from their modest Fargo HQ. The Gerhardt criminal empire has lasted for decades, but their territory is jeopardized when patriarch Otto (Michael Hogan) has a stroke. Left to keep the business running are his wife Floyd (Jean Smart) and three sons: the raging Dodd (Jeffrey Donovan), the simmering Bear (Angus Sampson), and the runt of the litter, Rye (Kieran Culkin). As if losing Otto weren’t enough, the Gerhardts are about to be confronted by the Kansas City mafia — represented by enforcer Mike Milligan (Bokeem Woodbine) — who want to absorb their business. Their struggle is further complicated by Rye’s ill-fated attempt to prove himself: taking on a solo mission to intimidate a judge, he sets loose a bloody chain of events that entangles the saddest married couple of all time, Peggy and Ed Blumquist (Kirsten Dunst and Jesse Plemons). As the mayhem escalates into all-out war between vying criminal organizations, the law enforcement mess falls largely to young Lou Solverson (Patrick Wilson, doing an exceptional job channeling Carradine’s character) and his father-in-law Hank Larsson (Ted Danson).

As with the previous season, Fargo’s second year is a gripping, brilliantly suspenseful, bloody spectacle, mitigating its pitch-black subject matter with incongruous humor and the kind-hearted behavior of its heroes — in this case, Solverson, Larsson, and their created family, which includes Lou’s stoic wife Betsy (Cristin Milioti) and a boozing local barrister, Karl Weathers (Nick Offerman, in brilliant comic form). The masterful world-building continues here as well, the first season’s legacy given additional color by the period detail: the specter of Viet Nam hangs over the proceedings, even as the Reagan era looms, and these greater circumstances inform both the characters and the themes.

And it’s thematically, I think, that season two rises above its predecessor. The first season often felt like standard antihero fare, glorifying the exploits of its criminal element. While that sense doesn’t entirely vanish in season two, it feels like part of a greater tapestry, a more thorough social critique. If season one examined the criminal hiding inside us, season two is more interested in the environment that inspires that criminal urge: the circumstances that reward corruption, the value systems that encourage me-first attitudes, striving for notoreity, and the desperate need to win at all costs. This is most noticeable in the tragically clueless Blumquist couple, but also in the aspirations of the criminals. By critiquing the greedy, economic empire-building of the Gerhardts and the Kansas City mob, Fargo is also critiquing the American dream — a dream that, at this point in history, is about to be irrevocably mutated by Reaganism. If that message is occasionally on the nose in the season finale, it still moves the show into strong new thematic territory.

Season two also addresses another of my complaints: it provides strong, memorable female characters. Aside from Dunst’s ditzy, accidental criminal and Smart’s steely mob boss, season two gives us Milioti’s Betsy, struggling to cope with a bleak cancer diagnosis; Dodd’s treacherous daughter Simone (Rachel Keller); Peggy’s closeted lesbian friend Constance (Elizabeth Marvel); and Ed’s teenaged bookworm co-worker Noreen (Emily Haine). The women have more agency and depth, and the sexism that felt like accidental subtext in season one is called out and addressed. Yes, the playing field is still tilted male, driven largely by the violent subject matter; but the improvement is significant.

Be forewarned: this season of Fargo is an intense bloodbath. But it’s also a gripping, powerful, darkly funny entertainment full of propulsive narrative, confident filmic craft, and at least one brilliant WTF moment. Proving Fargo has more and different types of stories tell, season two builds impressively on the franchise legacy, and has pushed the series well up the charts on my all-time favorites list.

Previously, on Everything (2016 Edition)