Novel: A Hero of France by Alan Furst 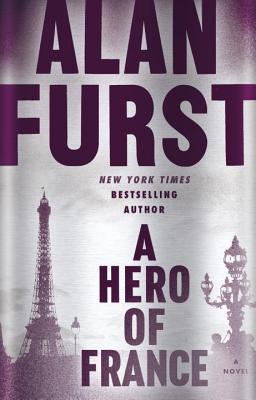 Alan Furst’s more recent releases are less standalone novels than collected episodes from the greater metanovel that is his entire body of work since Night Soldiers: a sprawling, now 14-volume chronicle of World War II as seen through the eyes of its many secret soldiers. This seems especially true of A Hero of France (2016), the latest, slim novel in the series which, like its predecessors, is vividly realized, impressive in its historical detail, and in complex dialogue with its series-mates. Unfortunately, once again the author has fallen back on strict formula, and seems to be running light on fresh ideas; there are glimpses of the old magic, but this is undoubtedly a lesser entry, and probably the first of the series to truly disappoint me.

Furst clearly loves Paris, so much so that he has contrived to set at least one scene per book there. This time he goes whole hog on this obsession, focusing his narrative on a Paris-based leader of the French Resistance, Mathieu (last name unknown). Mathieu is, unsurprisingly, a fortyish romantic with a fierce sense of a duty, an uncommon bravery, and a fine hand with the ladies. He’s also got a knack for staying one step ahead of the French and German authorities who want to shut down the escape lines he’s esablished across France to smuggle downed Allied airmen back to England. As the war rages and the challenges of the secret life intensify, Mathieu and his tight-knit network of colleagues feel the noose tightening in their defiance of the Third Reich, and face hard decisions along the way.

A Hero of France bears a superficial resemblance to Furst’s best work in its rolling, thoughtful prose, its effortless mastery of the era, and the exciting action setpieces. And there’s a certain intrigue to layering this volume down over Furst’s vaster mosaic, as characters from previous books flash into and out of the picture. One imagines a spectacular spreadsheet somewhere tracking fourteen novels’ worth of characters across time and space in Furst’s greater  metanarrative. By and large, it slots in adequately in the greater scheme of his achievement.

But there’s a certain something missing, and not just the disappointingly familiar protagonist and the clear reliance on the tried-and-true. As usual the book is broken up into episodes, but only one of them — “The Secret Agent,” in which Mathieu undertakes a mission to smuggle Allied saboteurs from a secret beach landing in Normandy back to Paris — truly stands out. Meanwhile, the closing segment, where the most jeopardy exists, is somehow the least suspenseful, and peters out in a sequence of summarized fates for Mathieu’s network. The result is a book that delivers the expected experience for the expected audience, without stretching at all from its comfort zone. In the past, this consistency never bothered me because it was so well done, but A Hero of France left me wondering if perhaps it’s time for Furst to finally try a new direction.