Film: Kubo and the Two Strings 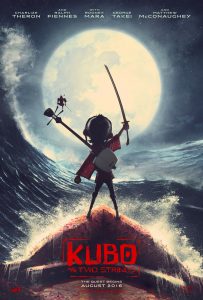 The opening of Kubo and the Two Strings (2016) is so moving and magical, and the film so full of visual wonder throughout, that I was surprised by my overall impression: I was underwhelmed. An animated feature drawing heavily on Japanese mythology, the film revolves around Kubo (voiced by Art Parkinson), a young boy who lives a simple, hardscrabble existence, caring for his ill mother and supporting them as the village storyteller. Kubo is a lively and imaginative boy who possesses a magical power: the ability to animate and control his origami creations. But he also has a troubled origin: he and his mother fled their mean-spirited extended family in the wake of violent conflict, which is about to be reignited. When Kubo’s evil aunts come to collect him, Kubo is forced to flee with Monkey (Charlize Theron), a statue come to life to serve as his guardian. Together they undertake a quest to recover three powerful artifacts that will protect Kubo from his horrible grandfather, the Moon King (Ralph Fiennes).

The first twenty minutes of Kubo and the Two Strings are utterly beautiful, bursting with powerful visual story-telling and splendorous imagery. And I was more or less onboard for the duration, enjoying its engaging action setpieces and amusing dialogue. In many ways it’s a refreshing change of pace from the increasingly familiar beats and tropes of big-budget animated cinema. But there’s something missing, or many somethings: a logical basis for the item-gathering plot, a coherent thematic focus, an assured handle on its messaging. There are many elements and ideas at play, but the script struggles to pick and choose how and when to deploy them, and they don’t work in perfect harmony. That doesn’t detract from the journey’s many great moments, but there are also distancing lulls, and a muddled climax.

In the end, I’m disappointed, largely because the film doesn’t deliver on its early promise. Those beautiful early passages create such an evocative, immersive mood, and it was a shame to watch that fall away. Even so, it’s a beautifully made and charmingly different film; I’m happy to have seen it, all the same.