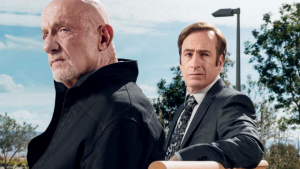 Better Call Saul will probably never satisfy a certain subset of the Breaking Bad audience: it’s perhaps too light and subdued to match the intensity of its source material. But this extended origin story of Jimmy “Saul Goodman” McGill (Bob Odenkirk) and Mike Ehrmantraut (Jonathan Banks) is a different kind of a great: a stylish, assured, and thematically strong tragicomedy, following the ethical dilemmas of its doomed protagonists with wit and intelligence.

Thanks to his dogged pursuit of a class action lawsuit against a retirement home, Jimmy lands his dream job: a partner-track position at Santa Fe law firm Davis & Maine, with a posh office, a company car, and a personal assistant. But even as he tries to play it straight, he soon comes to realize he’s a fish out of water, his tendency to cut legal corners causing conflict with close friend Kim Wexler (Rhea Seehorn), and ramping up his rivalry with brother Chuck (Michael McKean). Meanwhile, retired cop Ehrmantraut, still motivated by guilt to provide for his struggling daughter-in-law Stacey (Kerry Condon), entangles himself with local organized crime, entering into a dangerously escalating partnership with one of the cartel’s sharper lieutenants, Nacho (Orphan Black’s Michael Mando).

Along with characters and settings, Better Call Saul shares some stylistic similarities with Breaking Bad, but beyond that it’s decidedly its own show. If Breaking Bad looked for the evil lurking within us all, Better Call Saul is more interested in the smaller ethical compromises we make in order to compete and thrive in an unforgiving world. Neither Jimmy nor Mike are monsters in the vein of Walter White; they’re not even inherently bad people. They’re merely flawed ones, grasping for an edge, fighting their better nature as they continually make the wrong decisions for the right reasons…or vice versa. This keeps their individual journeys unpredictable and entertaining, even though we know their ultimate destinations. And this theme extends nicely to the major characters who don’t appear in Breaking Bad, namely Kim and Chuck, who tend to be most negatively impacted by Jimmy’s slippery moral code. Chuck is Jimmy’s opposite, a perfect foil, and the complicated sibling rivalry between him and Jimmy — and the entertaining interplay between Odenkirk and McKean — looks to be the structural heart of the series. Meanwhile, it’s a great season for Seehorn, whose role is thankfully expanded as Kim is attracted to, but also rejects, Jimmy’s troublesome conniving. Both Chuck and Kim have their own problems with moral compasses, but serve as more accessible and sympathetic counterpoints to the more problematic antiheroics of Jimmy and Mike.

Originally I wondered if knowing Jimmy and Mike’s fates in Breaking Bad would spoil the journey of Better Call Saul, but not only am I still interested in their stories, I’ve also latched onto other characters to care about — whose fates I’m just as invested in. In the end, unexpectedly, I may be enjoying this spinoff more than the original…and that’s saying something.

Film: The American Side