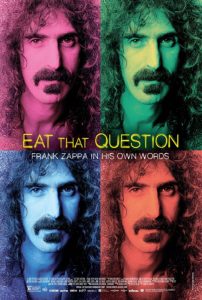 The complex, unforgettable music of Frank Zappa has long been a formative influence for me, but the documentary Eat That Question (2016) is a reminder that so is Zappa, the person. The film is comprised of numerous interview clips, spanning his storied career from the 1960s to the early 1990s. It’s not entirely sequential, but “conceptual continuity” and careful organization make it feel like a linear narrative, telling the story of Zappa’s life as it reveals his singular personality.

Identifying with Zappa is, on some levels, a troubling thing; at times his attitudes, particularly about women, are questionable at best. But the documentary does a good job of zeroing in on what made Zappa unique, not just as a rock musician, but as a composer, an entertainer, and a thinker. From the very earliest clip — an appearance on The Steve Allen Show, wherein a clean-shaven, shockingly polite Zappa teaches Allen how to play the bicycle — Zappa comes across as someone who sees the world from weird, zany angles. There’s a contrarian streak to his eloquence, and the sense of a celebrity buying into his own bullshit. But he’s also a fiercely intelligent social critic, whose off-the-cuff responses to interview questions are always spirited and entertaining, and sometimes delightfully weird. Both his outlandish humor and deadly serious views on art are the product of a mind that’s sitting off to the side of the world, observing with a mix of baffled amusement and cock-eyed disgust. As the interviews move from his irreverent rock touring days into the 1980s, the humor gets more scathing, particularly during his angry appearances on Crossfire and facing off against the PMRC during Congressional hearings. His concerns about the future effects of right-wing, Reagan Era Republicanism are positively prescient. It culminates in a heartbreaking, late interview, wherein he is clearly losing his battle with cancer — and being defiantly cavalier about it.

Alas, Eat That Question doesn’t always focus on the best of Zappa’s music; the musical segues are sometimes necessarily tied to the interview material, but I could have done with less of the crass mockery of “Dinah-Moe Humm” and “Bobby Brown Goes Down,” and more of Zappa’s intense and fascinating melodic instrumentals. Also, true Zappaphiles will see a lot of material that they’ve seen before from various concert films and videos. But overall it’s a worthwhile compilation of footage, providing insight into the mind of a truly one-of-a-kind artist.