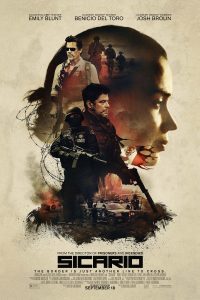 The most powerful spy films, I think, are the ones that wrestle with the ethics of the business. On that score, Sicario (2015) is a great spy film, and it also benefits from suspenseful setpieces, a deftly layered structure, and dynamic lead performances. Refreshingly, it also tackles an under-explored subject: the war on drugs.

Emily Blunt headlines the cast as Kate Macer, an exceptional young FBI agent who specializes in kidnap scenarios. Her most recent assignment clues her in to the ruthlessness of a Mexican drug cartel boss, giving her just the motivation she needs to volunteer for an interagency task force that’s planning to take him down. Lead by cagey good old boy Matt Graver (Josh Brolin) and haunted DOD consultant Alejandro (Benicio Del Toro), the task force blends shifty high-level scheming with boots-on-the-ground combat swagger, and their missions — to which Kate and her promising partner Reggie (Daniel Kaluuya) are only partially briefed — turn out to be nerve-wracking, dangerous operations straddling the U.S.-Mexico border. As the work progresses, the surface pretexts are gradually peeled away, revealing the true motives and dark objectives underneath.

Alas, Sicario doesn’t strive much to buck certain annoying Hollywood trends: namely, Blunt is the only significant female character, and racial stereotypes abound. But if you can get past that, the film is a well oiled machine that builds a chilling early mystique before ramping into a twisty, realistic thriller. Blunt is convincing as a formidable FBI agent whose conscience undergoes the supreme test when she enters a secret world that requires a whole new level of ruthlessness. Brolin and Del Toro are just as good as shifty veterans of that posturing, testosterone-filled world, while effective supporting work comes from Kaluuya, Jon Bernthal, Jeffrey Donovan, and others. Director Denis Villeneuve leverages the dry, desolate landscapes of the southwest to excellent effect, selling the bleak message of this dispiriting business, and the unforgiving expediency of how it’s carried out. A tense, hard-hitting watch.