Film: The Keeper of Lost Causes 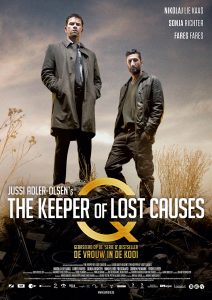 Jussi Adler-Olsen’s Department Q series get its first film treatment in The Keeper of Lost Causes (2013), a superbly crafted adaptation that smoothes over the novel’s rougher edges for a broader audience. Carl Mørck (Nikolaj Lie Kaas) is a Copenhagen police detective returning to the force after a traumatic incident that destroyed his team and shattered his marriage. Mørck is such a pain in the ass, however, that his superiors decide not to return him to his homicide beat; instead, they bury him in the newly formed “Department Q,” a dead-end administrative post where his job is to write reports and close the book on cold cases. But Mørck needs a more meaningful distraction from his miserable life, and seizes upon a particularly interesting case: the mysterious disappearance of Danish politician Myrete Lynggaard (Sonja Richter), who is suspected of having jumped to her death from a ferry even though no body was found. Mørck doesn’t buy it, however, and with the help of his upbeat assistant Assad (Fares Fares), he goes against orders to reopen the case.

I remember the novel as a deftly plotted, darker-than-dark story characterized by intensely detailed police work and difficult-to-read passages of physical and emotional abuse. The film version of The Keeper of Lost Causes stirs a smidge more light into its Nordic noir, keeping the bleak story but softening the grim, gritty detail and squicky brutality. It also softens Mørck, a rather unlikeable protagonist in the book; his filmic incarnation is considerably more sympathetic. He’s also more driven and proactive, less reliant on his hard-working assistant Assad for motivation. Fortunately, the Mørck-Assad partnership similarly earns its reluctant team chemistry, and the taut, explosive climax brings together the plot threads neatly. Overall, an excellent adaptation, and I’m excited to see the subsequent ones — evidently both The Absent One and A Conspiracy of Faith have also been produced, and are currently available on Netflix.