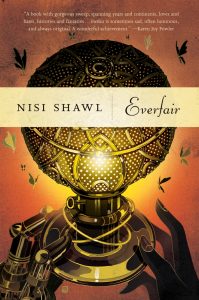 Nisi Shawl’s debut novel Everfair (2016) is a striking and ambitious book, a steampunk alternate history that tackles tough subjects in a sprawling mosaic. Do the components all work together perfectly? In my view, not entirely, but it’s impossible not to appreciate the novel for its beautiful prose, its scope, and its mission.

It imagines an alternate timeline in which members of the Fabian Society and American missionaries purchase land in the Belgian Congo to found a new nation, Everfair, in the late nineteenth century. A democracy composed of Congolese natives, freed American slaves, and expatriates from all over the world, Everfair is conceptualized as a tolerant haven, and its disparate citizens work together to realize that vision, aided by the emergence of new steam technologies that transform their society. But the march of history throws numerous world-shaking challenges in Everfair’s path, including a world war, forcing the nation’s citizens to work tirelessly to sustain their society.

Everfair’s mosaic structure involves numerous viewpoints and short, time-gapped chapters that incrementally paint a picture — a storytelling strategy adopted, perhaps, to convey this multicultural society’s gradual progress. At times, the scattered approach makes it a difficult read; a sustained, flowing narrative is sacrificed in a favor of a cumulative impression of the setting, pieced together from the observations of a massive cast of characters over a span of decades. Fortunately, the pieces are finely rendered with beautiful prose, complex relationships, and fascinating historical detail. The novel ventures into largely unexplored corners of history, giving voice to marginalized races, genders, and sexualities against a backdrop of epic geopolitical upheavals.

It’s perhaps not the most compellingly readable novel, frequently changing focus in a manner that is occasionally distancing. But it’s also unlike any other speculative history I’ve ever read, compensating for its somewhat disjointed storytelling with other assets, especially an impressive historical reach and a hopeful political vision. Overall, an impressive debut.

Film: The Keeper of Lost Causes