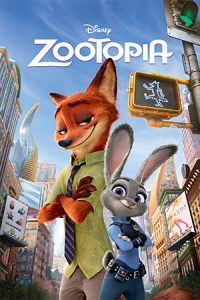 The world probably needs more movies like Zootopia (2016) right about now; it’s an entertaining animated parable with a much-needed anti-discrimination message. In a harmonious animal fantasy world where prey and predator have finally learned to live together, Judy Hopps (voiced by Ginnifer Goodwin) is a young country rabbit with a goal: to become the first ever rabbit police officer. Although she fights her way through the academy and graduates at the top of her class, Judy is in for disappointment when she reports for duty in the dazzling metropolis of Zootopia: her boss, dismissive of rabbits, puts her on parking duty. But Judy’s boss isn’t the only citizen with prejudices to overcome: Judy, who has internalized family prejudice against foxes, is tested when she meets Nick Wilde (Jason Bateman), a fox who becomes a key lead in a massive, city-wide missing persons case that Judy decides to pursue.

Zootopia overcomes a slowish start to ramp into an engaging, comedic animated adventure, its best asset eye-popping visual worldbuilding, which is 3D-centric but translates well to the flatscreen. The city of Zootopia, which features neighborhoods tailored to the various climates of the animal kingdom, is a striking cinematic achievement, serving as a great backdrop for the mystery. The sight gags and dialogue make for a pleasant, family-friendly comedy, and one with sure-handed messaging that could come in handy helping children resist the toxic new landscape of Trump Nation. I wish its plot weren’t so timeless, but it couldn’t be more timely.

Novella: Everything Belongs to the Future by Laurie Penny