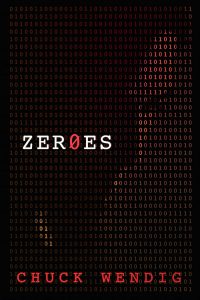 Chuck Wendig’s action-packed hacker novel Zeroes (2015) has all the quirky character and spitfire language of his notoriously opinionated blog posts. Since that was pretty much what I was looking for, I found it satisfying, a fast and furious, cinematic read. It opens like a seventies heist movie, as government agent Hollis Copper rounds up and arrests a team of hackers: Chance, Aleena, DeAndre, Reagan, and Wade, a diverse bunch of computer geek misfits who are thrown together in the “Hunting Lodge,” a secret government facility where busted computer geniuses are put to work doing Uncle Sam’s dirty work. But this pod of five mismatched oddballs, who come to be known as “the Zeroes,” gradually come together as they start to make sense of the hacking challenges that are thrust before them.

Zeroes is a breezy, fun read, with a solid premise and well clocked plotting. Wendig likes his characters a little more than I did, I think: the humor of their bickering banter didn’t always entirely click for me. But their hearts are in the right place and they eventually make for a winning created family; similarly, the novel’s thematic subtexts are agreeabele, once you dig past the politically incorrect rough edges of its players. Happily, Wendig is as colorful and audacious in his fiction as he is in his opinion.