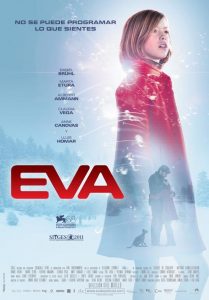 Polished, professional, dull as rocks: that’s my nutshell reaction to Eva (2011), a Spanish science fiction film that layers a futuristic surface over its conventional human drama. Alex Garel (Daniel Brühl) is a robotics genius who returns to his home town to complete a highly advanced project: a robot with human emotions. Which is ironic, since Alex seems to have repressed so many of his own emotions; strained encounters with his brother David (Alberto Ammann) and sister-in-law Lana (Marta Etura) soon reveal why. But David and Lana also have a daughter, Eva (Claudia Vega), a clever, precocious, and unpredictable 10-year-old who Alex quickly comes to believe may be the key to perfecting the emotional software of his creation.

The film boasts some gorgeous mountain scenery, an excellent score, and highly professional performances across the board, especially from the young Vega, a remarkable young actress who pulls off the film’s crucial role with aplomb. The CGI visuals aren’t entirely convincing, but they’re effective enough. What Eva lacks is a compelling narrative: there’s no momentum, no energy, and no real surprise, and because the characters aren’t particularly fleshed out or memorable, the plot’s bittersweet moments and tragic turns lack impact. It’s an earnest and attractive effort on many levels, but ultimately falls short.

New Review in the February 2017 Lightspeed