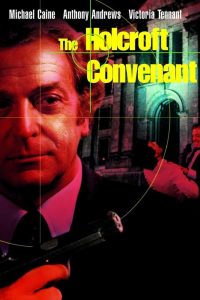 I spent most of The Holcroft Covenant (1985) thinking to myself: “Is this really the same John Frankenheimer who gave us The Manchurian Candidate, Seven Days in May, and Seconds?” The answer is yes, but it’s rather odd to witness how its visual sensibility, which worked so well in the 1960s in black and white, can seem so utterly weird in a synthetic, color 1980s context.

In the dying days of World War II, a trio of repentant Nazis set up a Swiss bank account full of stolen funds from the German war machine. Forty years later, Noel Holcroft (Michael Caine) — a British-born American citizen and a mild-mannered architect living in New York — is lured to Switzerland by a lawyer named Manfredi (Michael Lonsdale). Manfredi’s job is to contact the Nazis’ children, who are to establish and manage a foundation with the stolen money that will make up for their parents’ war crimes. Holcroft wants nothing to do with his father’s legacy, until he learns that the money now amounts to four and half billion dollars, and he imagines all the good he could do with it. But that’s an enormous gift horse to look in the mouth, and sure enough there are strings attached, as Holcroft is drawn into a tangle of intrigue surrounding the money — and his role in the affair turns out to be more precarious than anticipated.

There are certain types of films from around this time that seem stuck between eras, and The Holcroft Covenant is one of them. The film’s stagy, old-fashioned thriller trappings and Nazi fortune storyline seem better suited to the technicolor vibe of the sixties than the artificiality of mid-eighties cinema. Frankenheimer’s inventive, cockeyed camera angles occasionally offer glimpses of the old artistry, but the talky script and painfully synthetic soundtrack frequently step on any potential movie magic. Caine’s talent doesn’t disguise the fact that Noel Holcroft makes for a rather naive hero. The trap he waltzes into is fairly obvious, robbing the story of surprise, while the dramatic tension leans too heavily on an unconvincing, sparkless romance between Holcroft and one of the other Nazi descendants, Helden (Victoria Tennant). A glimmer of spy thriller fun is as far as its gets, alas; by and large, this one is a disappointment.