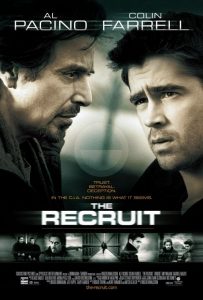 Flawed but polished, The Recruit (2003) is a confidently executed post-9/11 spy thriller. James Clayton (Colin Farrell) is the ne’er-do-well son of an oil man who died thirteen years earlier under mysterious circumstances. A technical genius without ambition, Clayton’s curiosity is awakened by Walter Burke (Al Pacino), a talent-spotter for the Central Intelligence Agency. Burke charms his way into Clayton’s life, enticing him to apply for the CIA with the unspoken promise of finally learning the truth about his father. But Clayton’s journey through “the Farm,” which involves a flirtatious rivalry with fellow recruit Layla Moore (Bridget Moynihan), winds up being more fraught and challenging than expected. The complex exercises of CIA training soon start to feel all too real, until Clayton can’t tell the difference between the tests and reality.

Thanks to Farrell’s energetic performance, brisk pacing, a meaty script full of thematically loaded dialogue, and an assured, striking tone, The Recruit makes for thoroughly entertaining, highly professional spy fare. While the plot escalates well, there is an inherent structural flaw: once the action starts rolling, it quickly becomes clear there’s only one logical way for the story to play out. Fortunately, some clever late reversals rescue the script’s more problematic early beats. As a past-it spook, Pacino is peculiar casting; his real-life persona looms over the role loudly, somewhat undercutting his persuasiveness as an invisible man behind the scenes. But he’s still great fun, leaning into the affair with his usual conviction, and the dramatic fireworks between him and Farrell help gloss over some of the sketchier technical issues and questionable spy-world details. Viewers less steeped in the genre might find this a decent gateway drug for classic spy tropes, but even an old hand like me found enough to make it worth the watch, despite its issues.