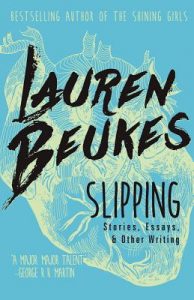 Single-author collections can sometimes feel like side projects, perhaps merely of ancillary interest in an author’s oeuvre. This isn’t the case with Lauren Beukes’ Slipping: Stories, Essays & Other Writing (2016), a bold, impressive record of her work’s unique energy and versatility.

Over the course of four novels, Beukes has developed a reputation for shifting effortlessly into new and different gears, her genre work running the gamut from post-cyberpunk SF to gritty urban fantasy to horror-tinged police procedural. Slipping reveals even more modes, a blend of traditional and experimental pieces that span multiple genres. Those early futuristic chops shine through in tales like “Branded,” which depicts a future in which corporate sponshorship mashes up with body modification, and the slick, prescient cyberjournalism tale “Riding with the Dream Patrol.” “Confirm/Ignore” is a sort of contemporary fiction that riffs on the notion of social media as vehicle for generating alternate realities, a before-its-time spin on the notion of Internet complicity in post-truthism. Just as engrossing are the more traditional SF stories like “The Green,” a vividly imagined colony world scenario, or “Unathi Battles the Black Hairballs,” an inventive, manga-inspired adventure with a humorous, stream-of-consciousness feel.

The non-SFnal tales are sociopolitically charged. The funny, fantastical “Princess” is a saucy, feminist reimagining of “The Princess and the Pea,” while more scathing glimpses of gender issues tinge the biting horror of “My Insect Skin” and the quietly creepy stalking plotline of “Parking.” Then there’s “Dear Mariana,” a clever epistolary of relationship horror that deploys a playful formal conceit.

Most of Beukes’ work brandishes the sharp edge of critique, targeting social injustice, gender inequality, and media manipulation, among other topics. When late in the volume the content switches over to non-fiction, the underpinnings of the author’s worldview come more into focus, while also illuminating her approach to fiction. Most striking of these is “Adventures in Journalism,” which paints a picture of Beukes’ journalistic roots and how they inform her creative process. There are also powerful pieces regarding her novel research: “All the Pretty Corpses” (The Shining Girls) and “Inner City” (Zoo City). The non-fiction selections are an effective touch to end the collection, highlighting the uniquely effective power of Beukes’ varied prose: her non-fiction effortlessly elevates real-life scenarios to the feel of heightened-reality legend, a reversal of the way so much of her fiction seems to be digging at a larger truth. I knew going in that Beukes was a powerfully talented wordsmith; Slipping broadened my appreciation more than I was expecting. Very highly recommended.