Novella: The Asylum of Dr. Caligari by James Morrow 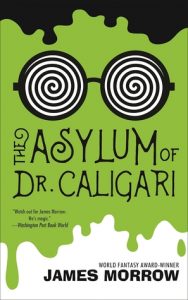 The best satire succeeds by getting at certain truths. Perhaps nobody working in the genre has a better grip on this notion than James Morrow, who’s made a career of irreverently skewering the foibles of humanity. His forthcoming novella The Asylum of Dr. Caligari (Tachyon Publications, June 2017) is the latest ingenious example of his work, an inventive historical fantasy that layers slick, intelligent humor over a bedrock of serious antiwar critique.

In the summer of 1914, American artist Francis Wyndham takes a job as an art therapist at Träumenchen, an asylum in the fictional western European country of Weizenstaat. As it turns out, the man running the asylum, Dr. Alessandro Caligari, is an artist in his own right — and also a sorceror, callously capitalizing on the martial fervor of early twentieth century Europe. One of his paintings has the power to brainwash soldiers into a feverish lust for battle, a “service” Caligari soon begins selling to both sides in the Great War. Wyndham quickly falls for one of his art students, Ilona Wessels, who displays similar talents for magic. Together with the other patients and employees of the asylum, they hatch a conspiracy to destroy Caligari and hopefully put an end to the War to End All Wars.

The Asylum of Dr. Caligari is a fast, funny book, which might make it easy to mistake for disposable entertainment. But under its zany surface, Morrow has seeded a sad, heartfelt message about the “transcendently meaningless” cost of war, perfectly situated against the backdrop of World War I. The art-magic worldbuilding is creative and well rendered, and those familiar with the era will enjoy the guessing game of determining whether the novella is a secret history or an alternate one. Brilliantly walking the line, its zippy energy camouflages a surprisingly powerful resonance. It’s yet another seriocomic triumph from one of the genre’s best satirists.