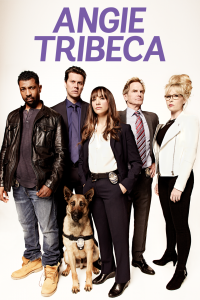 This will be an odd review wherein I point out there are reasons to watch Angie Tribeca, even though it’s kind of terrible. Indeed, it’s one of the stupidest things on TV. In this new Platinum Age of Television, or whatever the hell we’re calling it, how is there room for something this weak? Yet there’s something endearing about how whole-heartedly this show leans into its stupidity. Maybe the world needs that sort of thing every now and then.

Los Angeles cop Angie Tribeca (Rashida Jones) is a lone wolf, a rebel on the force, she doesn’t play nice with others, you get the drift. So naturally her hard-nosed lieutenant forces a new partner down her throat: Jay Geils (Hayes McArthur). Together they solve crimes.

That’s about it. Angie Tribeca is a send-up of the formulaic, cookie-cutter cop shows that have littered the airwaves for the past thirty years or so, culminating in episodic franchises like Law & Order and CSI. On points, I think NTSF:SD:SUV does the same thing better, but the genre is a ripe target, and Angie Tribeca, when it works, takes the piss out of it effectively enough. It’s kind of a throwback, with an old-fashioned style of humor that dates back to things like Police Squad! (in its better moments) or Get Smart (in its worse ones). Oh, there are glimmers of comedic spark. The performers — led with conviction by Jones, McArthur, Deon Cole, and Hoffman (a German Shepard) — are game for anything, so when the script dishes them a good line or a decent sight gag, the jokes do land. And there are genuine laugh-out-loud highlights: the Gary Cole chase scene in the pilot, a guest appearance from Maya Rudolph as a romance writer, Keegan-Michael Key as “Helmut FröntBüt,” a clever Mr. Robot parody.

But oh, when this show fails, it fails spectacularly. Its unfunny episodes may well be some of modern TV’s absolute worst. Still, there’s something about its utter lack of pretension that makes this palatable, even as you’re groaning at it — or worse, staring quietly at it while mechanically eating a sandwich. It’s not so much that it’s “so bad it’s good” (although sometimes that applies). It’s that it’s so bad and it doesn’t care. It just does what it does. There’s something pure about that. Maybe when the competition is so fierce, one way to carve your niche is to be comfortably, unselfconsciously terrible. That’s Angie Tribeca. You shouldn’t watch it, but for some reason, I do.