Novel: The Moon and the Other by John Kessel 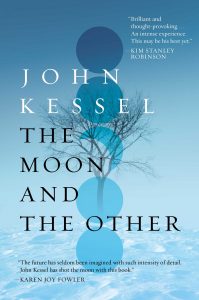 In the early 2000s, John Kessel wrote a series of stories about the Society of Cousins, a matriarchal Moon colony established as an alternative to humanity’s history of male-dominated governance. He returns to this setting in his epic novel The Moon and the Other (2017), and it couldn’t be more timely, a confident and engrossing blend of hard science fiction, character-driven drama, and sociopolitical thought experiment.

In the Society of Cousins, men have reduced political power but a uniquely open lifestyle that permits them to channel their more aggressive energies into sex, sport, or whatever other pursuits strike their fancy. Women, meanwhile, have the vote, run the government, and generally maintain the Society’s alternative lifestyle. Despite a system designed to coddle and encourage them, many of the Society’s men — along with some of its women — feel that the Cousins’ inverted hiearchy is unjust, leading to a vocal movement to extend the vote to men. This movement draws the attention of the Organization of Lunar States, as the Society is already a controversial place — a colony closed to outsiders, with a mystique both fascinating and disquieting to the more traditional lunar settlements. Rumors of dissent only sew new interest.

Through the eyes of several strongly developed protagonists, the novel depicts a series of turning-point events in the Society’s history. Most prominent of the viewpoint characters is Erno, a former citizen of the Society of Cousins who was exiled many years previously for his activities in association with a legendary men’s rights provacateur. In his years since leaving the Society, Erno has seen an eyeful of much worse injustice in the Moon’s more traditional patriarchies, which gives him a unique perspective when he returns to the Society as a member of a lunar task force that’s been sent to study and report on the Cousins’ treatment of men. Alas, the committee’s various members possess a litany of conflicting agendas, which is about to turn the Society into the battleground of a political proxy war — and possibly change it forever.

The Moon and the Other is an intelligent, thought-provoking science fiction novel that infuses its traditional sense-of-wonder setting with an uncommonly astute and topical examination of gender politics. It’s easy to see why Kessel chose to write so much about the Society of Cousins: it’s a rich, thoroughly imagined setting, full of vivid science fictional detail. But it’s also a distinctly human, politically charged drama that shines insightful light on the problems of the present. Alas, the complex weave of largely negative reactions to this matriarchal social experiment seems all too plausible. But there’s also hope embedded in the characters’ struggles to make this unique society work, even with the inexorable forces of greed, tradition, and historical prejudice aligned against them. Sounds familiar, doesn’t it? The Moon and the Other has a memorable cast, a masterfully executed plot, smart worldbuiling, and a thoughtful, heartfelt message — the whole package. Highly recommended.

TV: The Dawns Here Are Quiet