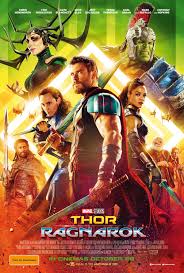 In an uneven MCU franchise, Thor: Ragnarok (2017) arrives as the most clever and entertaining entry, thanks to a refreshingly erratic structure, a keenly executed sense of humor, and spirited performances from its A-list cast. Oh, it’s as empty and unfulfilling as the popcorn I devoured before the opening credits, but Marvel junkies will find it a bracing diversion.

When Thor (Chris Hemsworth) returns to Asgard to find that his trickster-god brother Loki (Tom Hiddleston) has taken charge — masquerading as their father, the king Odin (Anthony Hopkins) — Thor drags Loki to Earth, where the incapacitated Odin has been sequestered. The mission to return Odin to his rightful throne is interrupted when a heretofore unknown sister, Hela (Cate Blanchett), arrives on the scene. Revealing dark secrets of Asgard’s past, Hela vanquishes Thor to the world of Sakaar, a bizarre, desolate world surrounded by dimensional portals where the garbage of the cosmos piles up. Captured by Valkyrie (Tessa Thompson) and imprisoned by the outrageous Grandmaster (Jeff Goldblum), Thor is forced to become a gladiator in a death match tournament. But Thor has designs on breaking free of his confinement and returning to Asgard to save it from Hela’s reign.

Thor: Ragnarok opens rather incoherently, I think, and it probably ambles on a bit longer than it needs to. Its plot is riddled with holes and implausible coincidences. Yet somehow it succeeds — not as high art, perhaps, but definitely as highly enjoyable pop culture. Its winning strategy is to lean heavily into zany tone, eye-popping visuals, and relentless comic atmosphere. Thor has always been kind of a difficult hero to relate to, but Hemsworth brings the perfect mix of charm, gravitas, and torso to the role. The supporting cast is rife with talent in fine comic form, especially Blanchett, Mark Ruffalo (reprising his role as Bruce Banner/Hulk), and Goldblum, who leans delightfully into his Goldblumminess to enact a memorable villain. I can’t imagine the story will linger long in the memory, but in the moment, Thor: Ragnarok is wholly engaging and wildly fun.