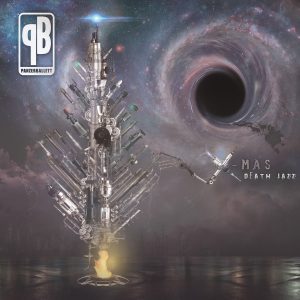 It’s no secret to people who know me that Panzerballett, a virtuosic German quintet that blends rhythmically complex metal, jazz, and funk in endlessly creative ways, is my all-time favorite band. Over the course of their first five albums, Panzerballett — led by composer-guitarist and musical mastermind Jan Zehrfeld– has made a history of absurdly inventive cover versions of other artists’ tracks. Abba, AC/DC, the Brecker Brothers, Dave Brubeck, John Coltrane, Danny Elfman, Henry Mancini, Weather Report, and Frank Zappa have all gotten the Panzerballett treatment, and the results are always interesting, often hilarious, ever-intense, and sometimes barely recognizable.

X-Mas Death Jazz (2017) may be their ultimate cover album. It almost feels like the response to a dare. Can you take conventional Christmas music and render it complex, aggressive, groovy, chaotic, heavy, funny, and even occasionally beautiful? The answer is yes. From the ear-wormy opening tones of “White Christmas” to the growling, death-metal outro of “Let It Snow,” X-Mas Death Jazz delivers the goods, eight Christmas classics reinvented so thoroughly that they may as well be originals.

Appropriately, the aforementioned tracks open and close the album, perhaps its most recognizable melodies. The herky-jerky rhythms of “White Christmas” feature effective vocals from guest singers Mattias IA Eklundh and Jen Majura, but it shines even more in its exquisite guitar solos. “Let it Snow,” meanwhile, features a perfectly cast Mike Keneally on guest vocals and veers through multiple demented sections — including odd-meter funk riffs, power chords, and jazz walks — on its way to a sinister ending.

Great as these two tracks are, they bookend an even more robust and impressive middle stretch. Most interesting are a pair of lesser-known traditional German Christmas tunes, both worth sampling just to compare against Zehrfeld’s insane arrangements. “Kling, Glöckchen” converts a gentle 19th-century Christmas carol into atmospheric, dramatic heavy funk, while “Es kommt bald” warps a popular German carol (“Leise Rieselt der Schnee”) into a driving, intense power ballad, with an effective assist from vocalist Martin Strasser. The bass and guitar solos on this track are gorgeous.

More “familiar” fare comes in the form of “The Little Drummer Boy,” here a propulsive jazz-metal reinterpretation that would probably turn Bing Crosby over in his grave. (Zehrfeld’s belted, R-rolling pa-rum-pum-pums on this deranged cover are the album’s comedy highlight.) Eklundh lends more brilliant vocals in a deeply disturbing rendition of “Rudolph the Red-Nosed Reindeer,” a hilariously evil-sounding absurdity that seems intent on examining the traumatic, non-conformist struggle underlying Rudolph’s happy-ending legacy. “Jingle Bells” gets a challenging jazz-metal fusion remix in “For Whom the Jingle Bells Toll.” The album’s least effective track may be “Last Christmas,” a dirge-like reimagining of a popular Wham! tune; even so, it’s quite a track, full of melancholy dissonance that manages to change the meaning of the title. (If George Michael is singing about last year’s Christmas, Zehrfeld’s instrumental arrangement may be depicting the final Christmas of human history.)

X-Mas Death Jazz will be way too esoteric and inaccessible for conventional listeners, but it may be the perfect Christmas album for others, especially, well, those who usually hate Christmas music. It manages to both conjure and dismantle the Christmas spirit, bringing irreverence, chaos, and anger to the traditional music’s more saccharine moments, but also delivering moments of true beauty that seem true to the spirit of the holiday. This is not even remotely a throwaway holiday release; in fact, against stiff comeptition, it’s probably my favorite Panzerballett album yet.